<p>Lovebox is a two-day music festival held in Victoria Park, London. The event has been running since 2002 and was...

Lovebox – A Promising Line Up But Fails To Pack A Punch 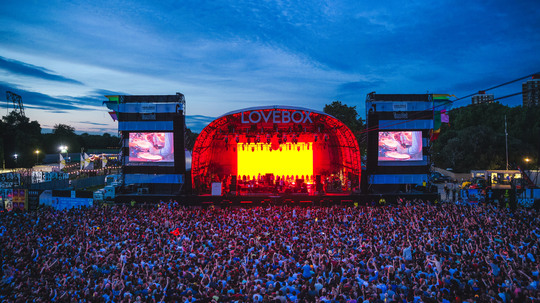 It’s the festival for the cool kids of London – the ones who listen to music beyond the radio friendly pop songs and the abundance of Adele and Coldplay hits. This is the London festival with the biggest and best upcoming artists from the alternative music scene – this year, it was packed with grime, reggae and electronic music. Playing host to the likes of Kano, Chronnixx, Stormzy, Jungle, Run The Jewels and LCD Soundsystem this was a bold, eclectic line up.

Lovebox dangles this lineup like a carrot to a donkey and, like a charm, Londoners snap up tickets to the final hundred. And it’s not just about the music, there’s also some limited extra activities such as a roller disco, ‘The Voicebox’ for poetry and an appearance from Marawa’s Majorettes, a group of record-breaking hula-hoopers – yep, it’s all going down at Lovebox.

Granted, some artists smashed it. Chronixx, a Jamacian artist with a flair for classic reggae, filled the Main Stage with such a presence and energy that even those with less of an incline for reggae was swept up in his sunny sounds. David Rodigan (MBE), DJ legend, played the smoothest of sets on the West Stage. Jungle packed in such sass and hip shakes to their completely unique sound, Giggs had the most infectious confidence and finally Major Lazer, the pinnacle of Friday night, showed how live performances on a huge stage should be done. The band, who said: "London is the number one party capital in the world", created a party to the tens of thousands who, quite literally, ran to see them.

But it’s not all good. Stormzy, who has killed it since I first saw him play at the beginning of his career, felt somehow lost in the vastness of the main stage. Seeing Stormzy is usually dirty, skanky and you’ll end up with at least a pint of beer or piss on you – he’s the fearless grime artist who can whip up a crowd in seconds – but something was missing. I couldn’t work out if it was the crowd, who didn’t seem massively pumped by his bars, or Stormzy’s performance itself, but the 40 minutes he was on stage was pretty uninspiring.

Run the Jewels were similar. The American hip hop band set Barcelona on fire at Primavera Sound festival, but here the crowd was less crazed-and-crashing and more scarce and sporadic.

It’s always difficult when what is often underground music comes to big, commercial events. Some artists thrived on the larger crowds, stamping their name on new fans – but others, with their normally fiery sets, felt restrained. Though the line-up is solid and the festival’s ability to pull in some of the most promising artists is noteworthy, Lovebox tried too hard. With such a range of sounds on so many stages, artists were drowned out and the spirit of Lovebox was, quite simply, diluted by the enormity of its variety.