Live at The Garage, London

Miss - They're Not Misguided 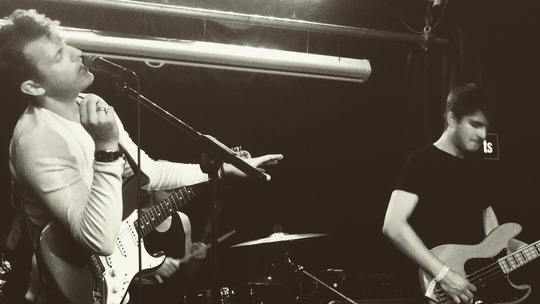 Founding members, Marty and Ben met at university and in recording their debut EP, ‘Do You Feel Electric’, brought in Wilson for their live shows. Charming and witty in conversation, the band are optimistic that one day they'll be "more popular than Miss Selfridge" - a humorous reference to it being difficult to find the band on Google search.

The venue for the band’s 9th performance was London’s landmark indie and alternative music venue, The Garage, in Highbury & Islington. It was here that electronic dance music duo Orbital first performed back in March 1990; and where the likes of Cat Power, the Killers and Biffy Clyro have graced the stage.

For a band so young, both in age and in terms of the music scene, there’s an impressive maturity and depth to their style and lyrics. The songs shift and change direction in unexpected ways - this being inextricably linked to the band’s writing process, attributable to lyricist Felton.

The set began with ‘Ant vs Elephant’, a musical metaphor for the rich and resonant style that epitomises the band. The song starts off as a slow paced quasi love song with lyrics like, "we fight for the hell of it"/ “my lip tends to swell a bit”, and then develops into a powerful and unforeseen climax.

‘Smokescreen’, an intoxicating bass-heavy track with lots of spacey-synth reverb was a personal favourite. The mix of outspoken and pretentious lyrics stirred the imagination - “Oooh do you feel electric? Me too... there's enough of us to tango, so let's f**k the night fandango”.

In amongst the familiar, were yet-to-be-titled new songs that were well received by the crowd.

‘Kinkajou’, the third single from the band’s EP, was the final song of the night. Shifting from questioning to desperation, disinterest to longing. The howl of “can I make you stay,” induces the notion of solidarity and implores you to pay attention. The fluctuating, driving grumble of the bass; the crashing drum and cymbals; and the steady, angry beat bring to mind the fire and passion of an angry mosh pit. It’s difficult to not like this song.

Despite some sound problems, the set was tight. My gig buddy who’d seen the band perform previously noted the improvement in performance. The band are keen to perfect their sound and play to as many people as possible with hopes of being in a position to tour and do festivals.

In the near future, the band’s schedule is busy, with lots of gigs booked up for the summer. Their next big show will be in Brighton next month; while September will see the release of their self-produced album, which I look forward to hearing.

For a technology-phobic band, you can find them on the usual social media channels but better still, go see them at a live show.