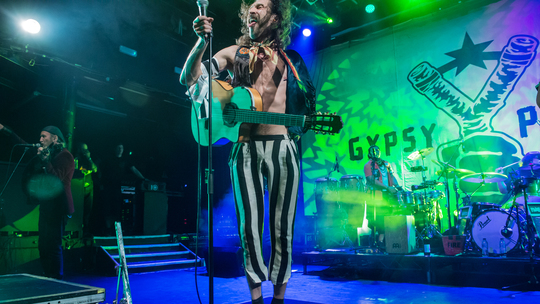 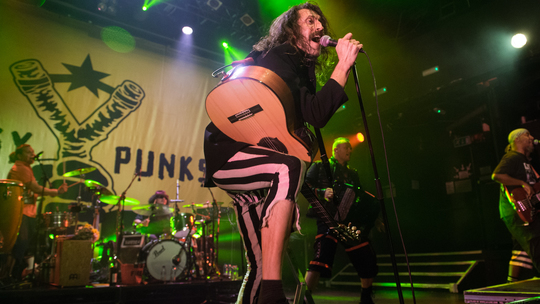 Gogol Bordello, the self confessed Gypsy Punks are back in the UK, and touring the album of the same title 'Gypsy Punks: Underdog World Strike', celebrating 11 years since it's release.

Many bands now tend to do the gimmicky album tour playing their seminal albums in full, usually their debut album and they have gone downhill since! Whilst Gypsy Punks is arguably the album that put them on the map they have consistently released great material since, even having time to feature in a couple of films and playing with Madonna!

Things kick off in order of the album with 'Sally', 'I Would Never Wanna Be Young Again', fitting as why would you when you can be having this much fun in your 40s, and then the whole crowd getting involved chanting along to 'Not A Crime'. Things slow down ever so slightly as they continue with the order and play '60 Revolutions' before it properly kicks in and there's knees going up all around us!

Gogol Bordello and this album in particular are a band that sound-tracked my time at university, a band that really take me back to a time and place, including going to a number of dates on the tour for this album at the time. Since that day they remain one of my favourite live bands and 10 years on things haven't changed, Eugene Hutz has relentless energy, some pretty nifty spandex and has nailed the art of crowdsurfing on a drum.

After playing the album roughly in order they treat us to a few of their other ‘hits’ including ‘My Companjera’, a sterling rendition of live favourite ‘Wanderlust King’ starting off slow before kicking in and sending the whole of Koko nuts, and they even treat us to an encore with an acoustic ‘Alcohol’ and a storming ‘Undestructable’.

We leave drenched in sweat, wanting more and eager for the next album, whenever that may come. We're happy to wait because when it comes, it's going to be good, isn't it, punk.