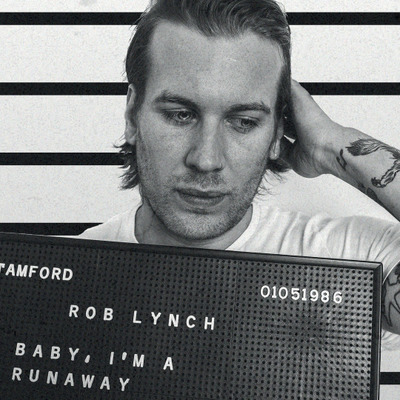 Lost On Campus has come a long way since he was last referred to as this title but has always aspired to be an act worth mentioning. Releasing a number of EP’s and his debut ‘All These Nights in Bars Will Somehow Save My Soul’, he received the ‘down to earth’ stamp as he sung of everyday situations, easily relatable to the musical masses.

No one is questioning Mr Lynch’s consistent lyrical abbreviations of routine and personal tales but a query is contemplated as to whether the Lincolnshire lion will remain as memorable with his second album, ‘Baby, I’m A Runaway’.

Released again with Xtra Mile Recordings, the album’s cover art suggests a troubled jazzy Tom Waits follower but instead introduces the major notes of “Prove It” from the offset, lifting spirits with bright Allegro timing signatures and a healthy dash of alternative folk rock.

“Runaway”s palmed guitar work and abrupt drum fill unveils the mark of a second soon-to-be devotee favourite with a ‘stay young’ message and belting chorus, effortlessly pertinent to the younger generations that welcome his English-coated glaze to their musical repertoire.

The uplifting soul may have made a habit in certain tracks of slightly buckling under the metronome, with sections slipping into unprecedented pot holes of vacuum packed lyrics and slightly mechanical plectrum strums, but luckily stripped back songs such as “Kings and Queens” and “Tectonic Plates” shift the album to the crossroads, diverting him in a direction away from the Frank Turner impersonations and instead, leading him back down the path of delicate Rob Lynch intimacy.

Very few examples of careless song writing appear on his half hour in the spotlight but a particular four minutes (3:48 to be precise) would have been worth cutting away from the majority. With predictable lyrics and weak metaphors guided by monotonous guitar rhythms, “Youth” is plainly the sore thumb that protrudes from this rather neat package of tracks.

It is a difficult decision when pondering exactly what time of day Rob Lynch’s ‘Baby, I’m A Runaway’ is best suited for. Strangely enough however, the hale and hearty combinations of angelic narrations, punchy guitar chords and elevating atmosphere can transfer from one extreme of easy Sunday listening to a night of cider soaked frivolity, thoroughly answering the formerly raised query with a resounding yes.