Tax The Heat Make The Heat! 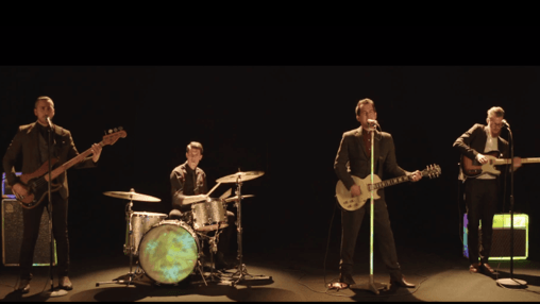 In a venue like Fibbers in York with a capacity of 600 I am always disappointed when so many people miss the support act. If you were at Fibbers earlier this week (Tuesday 26th July) for the magnificent Ash but you couldn’t be arsed to turn up for the support then you missed out on a stunning set from a young band with massive potential. Ladies, gentlemen and everyone in between I give you Tax The Heat. A band so good that not only do they tax the heat, they create it in the first place. Having said that I reckon they pulled a crowd of more than 100.

The band consists of Alex Veale (vox and guitar), Antonio Angotti (bass), JP Jacyshyn (Guitar) and Jack Taylor on drums. They come across as (and indeed they actually are) a clearly very well-rehearsed band that evoke the power, spirit and sound of the best of the 60's and 70's bluesy classic rock. I sensed a hint of The Who, Free, Bad Company & Led Zeppelin among others. But do not for a moment picture this merry band as rock revivalists; they are much more than that. Although they do have a very tenuous link with Led Zeppelin as their new album ‘Fed To The Lions’ was produced and mixed by Evansson, who has produced Robert Plant in the past. These sharp dressed men certainly don’t dress like they just stepped out of the 70's and in fact when they took the stage and I had my first look at them I was expecting maybe a more indie type Brit pop sound. So I was more than pleasantly surprised when they kicked into their driving, hard rock set. Incidentally I had decided not to listen to them on line before this show.

If the music industry was anything like it used to be then Tax The Heat would be playing massive venues and headlining festivals. Although there is still time for them to reach that level. “Animal” is, in my opinion, their strongest song and motors along smoothly with riffs and a chorus to die for. I also particularly enjoyed “Under Watchful Eye” which has an underlying prog feel to me. Antonio the bass player took that very quiet, serious and stoic stance favoured by John Entwistle of The Who. Clearly the whole band were enjoying themselves immensely on that stage. Especially Jack Taylor, drummer extraordinaire. He plays like the bastard son of Bonzo Bonham, Keith Moon and Animal from the Muppets and I mean that in the most positive way. The fact that Jack was at the front of the stage with the rest of the band probably helped.

Obviously I made the obligatory purchase of the CD version of their new album and that his been the only music played in my car this week. I also had the opportunity to meet Alex and Antonio briefly after the gig and whilst this might not help their rock ‘n’ roll credentials they seem like thoroughly nice blokes. If you get an opportunity to witness Tax The Heat live then take it, you will not be disappointed. Why not get yourself a copy of their album too.