Calling Out For Variety 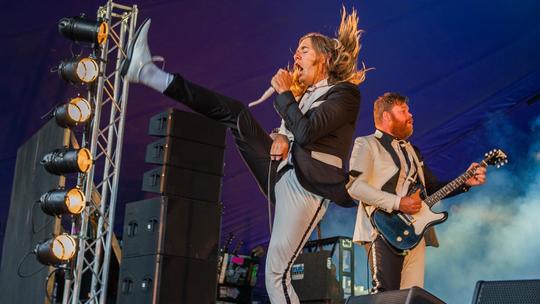 Dogs were everywhere. It was magnificent.

Returning to its rolling hills setting for an eleventh year, Standon Calling is a bastion in the UK family-friendly-festival calendar. With a combination of entertainment for all ages on the roster, including a strong selection in live music, Standon Calling provides both a metaphorical and actual playground for all those in attendance. There’s a swimming pool, TED talks, pissed dads galore, trapeze lessons and, of course, it’s supremely pooch-friendly, playing host to the infamous (and fabulous) dog show on Sunday afternoons by the Clocktower.

With previous years hosting sets from Florence and the Machine, Mumford and Sons and the Maccabees, there’s a good history of Standon’s bookers choosing up-and-coming acts wisely. This year it was Yak and Blossoms that provided the standout moments by artists on the undercard, showcasing the best of up-and-coming English guitar music.

Dragging their 60s blues rock into the modern day through the grunge of the 90s, Yak are a group that tear through their distorted tracks in a vein similar to Drenge. Heavier renditions of heavy tracks from debut album 'Alas Salvation' were aired, with the set only coming to a close - in true rock’n’roll fashion - once all their drumsticks had been snapped.

Blossoms on the other hand have a much more refined approach to their live music; the Stockport five-piece honing their pop-rock music by effectively having been on tour for three years. Live, Tom Ogden’s voice is as strong and recognisable as it is on record, and set-closer ‘Charlemagne’ as good an indie record as any produced in the last few years.

As well as the new-things-on-the-block roster appearances, there’s also the marquee names that have helped Standon Calling grow year-on-year in reputation and size. The weekend’s biggest crowd was for Jess Glynne’s Saturday night headline performance, where her highly-popular pop music was as surprisingly catchy as it was inoffensive. A juxtaposition to the rock music played earlier in the weekend, it was a (guilty pleasure) set fitting for any Eurovision.

Suede on the other hand delivered a strikingly sincere performance as the Friday night headliners, where ‘Beautiful Ones’, ‘She’s In Fashion’ and ‘Animal Nitrate’ seemed to resonate with the crowd as much as they would’ve done in the 90s. Suede occasionally sound like the Manic Street Preachers on the Atkins diet, but respect is due for the fact the Londoners are one of the last standing Britpop groups - especially given the competition they were up against some two decades ago.

Elsewhere, Everything Everything’s set was as clean as it was clinical, and despite the radio-friendly quality of the group’s songs you can’t help but think they watch Alt-J’s career developing with extreme pangs of jealousy. Such pangs are seemingly not known by Standon Calling’s highlight of 2016 though - The Hives were entertaining as they ever have been, fuelled by instantly-recognisable guitar riffs and unparalleled confidence. Pelle Almqvist is a frontman like no other, spending as much time joking between songs as he does singing on them (“I’d ask if you love me, but the question would obviously be rhetorical”). Even after two encores you felt The Hives could have played on for hours, with their tongue-in-cheek-but-actually-really-good rock music the perfect soundtrack for any festival.

Standon Calling seems to like sitting on the fence for whom it caters for, but because of that it provides a weekend of wide-ranging entertainment like no other. The Variety Pack of summer events.