Bury Me In My Boots

'Bury Me In My Boots' Digs Up Southern Gold 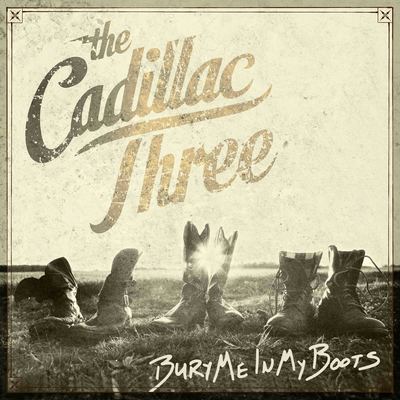 Bury Me In My Boots

The relationship that these three Tennessee-born musicians have always had, runs like a deep vein under warm flesh and connects them by the hip with the love they share for their home state of Tennessee.

Past tracks such as “I’m Southern” and “Tennessee Mojo”, are more than enough to convince their fan base that they have but a handful of perpetual principles that consistently revolve around this project, including encouraging intoxicated high spirits and bringing foot stomping rhythms that scream country consciousness.

Regardless of previous complications in marketing their music away from their preceding band title, this has not slowed the bands progression in any shape or form. Working alongside Big Machine Records and recently fraternizing with Abbey Road Studios in relation to live session videos, the long awaited second album by The Cadillac Three has finally arrived and comes with a hint of the general mannerism in the southerly common concept title, ‘Bury Me In My Boots’.

‘Bury Me In My Boots’ dictates a person who does not want to die a quiet death, but instead refers to ending it all in a dramatic or lively fashion, to which the individual has always led their life.

Stitched with country rock threads that pull everything together, their fourteen track release reveals a rich personality deviating between the tenaciously restless and the powerfully patriotic, and with their poetic content receiving praise in the past when writing for various chart toppers, it was effectively predicted that Jaren Johnston would not only deliver lyrically, but that his familiarly thick southern drawl would slide down the playlist and come into a head on collision with satisfied feedback.

“Slide” has the possibility to generate the largest hoedown seen at any live show or festival. With a foot lifting chorus and lyrics that digest the almost sensual slide sound of Kelby Ray’s Lap Steel, the beat barrows straight into the welcoming arms of the three pieces cool whiskey glass single, “Drunk Like You”.

The star studded/spangled track of the album suggests, “It’s all about the South” and what could be more Southern than featuring Dierks Bentley, Florida Georgia Line and Mike Eli in one song to add those hypnotic harmonies that make this track so finger lickin’ good.

Concluding on “Runnin’ Red Lights”, the gentle up and down plucking of this homesick melody provides a fitting sign off to this American blockbuster.

So whether you know them as The Cadillac Black or The Cadillac Three, there is no questioning that the artist’s exceptional commitment to their craft and country will continue to shine, until their career or they themselves mimic their album title.