We want great music from across the board, we want cool stuff to do when our ears need a rest, we want a relaxed... 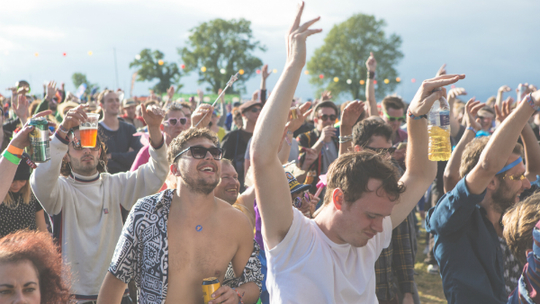 The last weekend in July saw FarmFest return to the quaint village of Bruton in Somerset to celebrate its 10th Birthday. Topping the bill this year were Young Fathers, The Hot 8 Brass Band, GoGo Penguin and the legendary Giles Peterson.

The manifesto of the festival positions FarmFest as “homemade, down to earth, creative, resourceful, collaborative and affordable.” This ethos enticed around 5,000 reveler’s to part with £50-£90 (depending on how early a bird they were) for two days of music. Gates opened on Friday morning and punters had to leave the site by Sunday afternoon - so as festivals go, a short one.

The first thing you notice when you enter the site is that the festival is manageable in size. The car park is a stone’s throw away from the camping area, which itself is right next to the arena – so forget 5 mile hikes with crates upon crates of Fosters for a 5 day Glasto bender. The small scope of the site makes FarmFest perfect for young families – who were catered for expertly with hat making workshops, a plethora of face painters and magicians, a Ferris wheel and a small stage in the shape of a train (which inevitably the adults took over as the night progressed…).

The first act of note was RHAIN, who confessed she had to ask for time off working in a Café in her home town the Isle of Wight to perform at the festival – she was very humble, almost a little nervous. Don’t let this undersell the artist though, who is fresh off a tour supporting Rufus Wainwright and whose charming set had the audience engrossed. The main stage to see Desert Sound Colony – who played a set that will luckily live short in memory. The band had to halt two songs midway through, which hinted that perhaps they’d had a few too many Somerset ciders before their slot.

Friday evening saw the flawless return of Brighton based beat-maker & producer DJ Format who reunited with Toronto lyricist MC Abdominal, ten years after the pair last collaborated. They were followed by Young Fathers who closed the main stage before The Hot Eight Brass Band, over all the way from New Orleans, got the Big Blue tent rocking once more. The one complaint would be that the Hot Eight Brass Band were not afforded a position on the Main Stage – as despite its somewhat misleading name the Big Blue is rather tiny compared to most festival tents, which left some unable to enter the tent.

Shout out at this stage must go to locally sourced Wild Beer Brewery, whose beers went down far too easily over the weekend. Top tipple – the Pogo APA! Another pleasant touch of was that all festival food was locally sourced, although was perhaps not as sophisticated and wide ranging as other festivals are these days. In fairness, organisers had no problem with festival goers leaving the site to nip down the road to local Budgens to formulate a picnic to bring back in to the arena.

Saturday’s musical high-points were provided by Pete Josef, an artist brought to the prominence by bill topping Giles Peterson. Set highlights included "Colour" and "The Travelling Song". GoGo Penguin then brought proceedings on the main stage to a close, headlining a festival bill for the first time. It hopefully won’t be time the Manchester three piece top a bill – as they delivered an enthralling live jazz show of world-class standard. Props to festival organisers for giving the band the opportunity to headline.

That meant that there was only time left for the legendary Giles Peterson to close the festival with a DJ set of trademarked worldwide music wizardry. He’s one of the few DJ’s around who can play a set of unknown alternate records and still have the revelers hocked. He’s STILL got it.

FarmFest caters for all and is a festival without pretension. So if you’re looking for a fun, easy going weekend with great music - consider FarmFest.