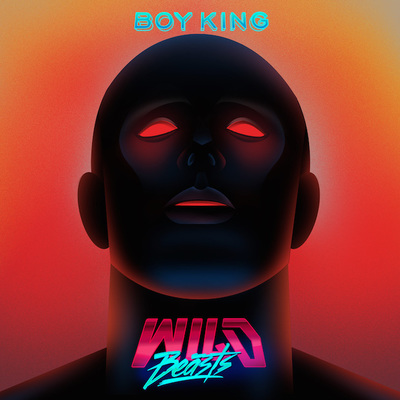 It’s a different breed of sleaze to that you’d bear witness to on Geordie Shore, what with it’s baby oil, men’s side bags and Avicii soundtrack. Wild Beasts new release, 'Boy King', isn’t the sonic embodiment of heading out to Ibiza to meet ladies, but of the stumbling from bar to bar along Kingsland Road whilst trying to work Tinder through blurred vision.

The underbelly of 'Boy King' seems to flaunt sexuality to a modern indie audience, picking up what Arctic Monkey’s started on 'AM' and running with it through distorted synthesisers and slow, reverberated drumming. Produced by the Grammy-award winning John Congleton, his influence of working with the likes of John Grant and St. Vincent is rife from the off, with heavy electronic beats and whirls underpinning each of the ten (eleven including bonus) tracks.

In truth the album starts much stronger to how it finishes which creates a level of imbalance, but that’s as much to the opening five tracks being outstanding as it is the latter six tracks feeling like filler. Opener ‘Big Cat’ is instantly catchy, a slow building number that builds instruments around the excellent vocals of Hayden Thorpe. Whilst it knocks on hedonism’s front door, politely suggesting at a new sound for Wild Beasts, second track ‘Tough Guy’ kicks the door down without a shirt on, singing the dark lyrics of “All this vice you revel in is for love” and “Lost souls are never to be found”. Limbo, Panto’s “Take this chips with cheese / As an offering of peace” feels like a longer ago than the eight years it actually is.

‘Get My Bang’ drips with the obvious carnal desire that the title suggests, with the buzzing bass creating music as raw as the lyrics (“No getting it right no getting it wrong / Just getting it on / That’s how I get my bang”). Thorpe’s falsetto vocals remain as strong as they were on the group’s four previous albums, an integral element to the Wild Beasts sound - even if their musical approach has changed.

The turning point comes in the shape of ‘2BU’, which fractures Boy King’s flow with its empty lyrics and a rhythmic approach that seem to try too hard to emulate Prince. ‘He The Colossus’ is far too distorted, and ‘Dreamliner’ takes so long to get going that it easily be more conceived a lullaby than a pop track.

Boy King represents Wild Beasts’ attempt to live up to their name, which they do spectacularly. Their new sound is certainly wilder and beastlier to previous records, with its addressing of modern-day-masculinity an exciting new approach for the four piece. It might have been recorded in the always sunny Dallas, but it’s perfectly suited to the dark early hours of the morning.