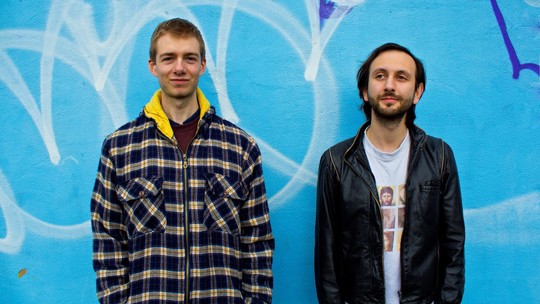 Organised Scum need to be on your radar. The London-based band have only played a handful of live shows, but they've still managed to pick up fans everywhere they go and there’s increasing excitement about the recent recipients of PRS Foundation funding taking them from London to New York on a string of tour dates. Long story short, these chaps are well on the ascendancy!

After recording around a dozen demos in a friend’s home studio, Organised Scum came to the attention of Shields bassist John Martindale via an off-air recommendation from BBC 6Music's Tom Robinson while Shields were performing on Tom’s radio show. Martindale, whose production credits include Nimmo’s ‘My Only Friend’ (recently Annie Mac’s ‘hottest record in the world’), offered to put together new mixes of two of their early tracks and invited the band up to Blank Studios in Newcastle to record their debut EP.

So why am I so excited about them? Well, they've drawn comparisons to Mac Demarco, Public Access TV, and Britpop acts like Pulp and Blur, but their sound is also heavily influenced by 70's and 80's New Wave acts like XTC, Wire and Pavement. While the Britpop vibes are apparent on their debut double-A-side single ‘Insane Making Behaviour/Who’s the Pr**k?’, singer Tom Duggins suggested their EP will demonstrate the New Wave and Shoegaze influences more clearly.

What perhaps makes the excitement surrounding the band even more surprising is their absence from social media. This means that the band have a small but loyal following, generated almost entirely through word of mouth. It's been quite accidental apparently they're just a bit too lazy to keep updating social media!

Organised Scum are going to be playing their first headline show on 22nd August at The Finsbury in London, I have a feeling it's going to be pretty awesome.