It's All Happening For Delamere 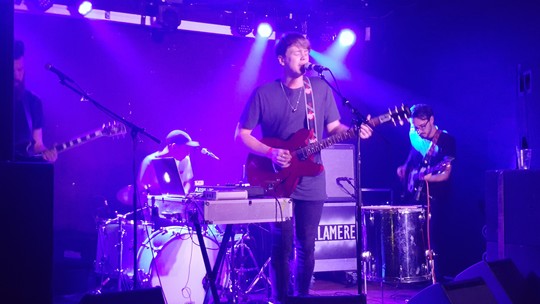 The Happening, held at The Bodega, Nottingham played host to a weekend of live music showcasing some of the best up and coming musical talent from around the UK.

Acts performed in both the downstairs bar as well as the upstairs venue. The final night of The Happening saw the Bodega welcome a host of local talent including Nottingham singer Rob Green and Midlands based Delamere.

Five piece indie band Ashfields opened for Delamere, and played a selection of original songs including Mimic, Eclipse and Here I Am. Ashfields had a great classic indie sound and feel, with their melodic guitars, rhythmic drums and pleasant vocals. The band also treated the crowd to a cover of Justin Bieber’s What Do You Mean?, a brow raising suggestion at first but an enjoyable cover nonetheless, and a fresh new take on the pop hit.

Rob Green, a surprise addition to the upstairs line up as he was transferred from the downstairs performance area to the upstairs, played a handful of tracks from his self-titled EP as well as some well known covers. His relaxed, open and friendly manner endeared him to the crowds. His natural demeanor was complimented by a great voice and one that was quite diverse as it switched between spoken word and friendly banter with the crowd to catchy pop songs such as Jessie J’s Price Tag and the Fresh Prince theme tune rap. Green also performed his most successful song to date, Blue, which gained popularity thanks to the appearance of Joe Dempsie of Game of Thrones fame in the music video.

A bit later than billed, due to the late addition of Rob Green, Delamere took to the stage. The group took to the stage and instantly raised the energy from that of Rob Green’s relaxed set. The band played a selection of songs from their upcoming self-titled album, including Bright Young Things, Rain and the recently released single entitled Kill It. Their energy whilst playing was great and added a nice rhythm to the night going from lively to relaxed and back to lively again for Delamere. Cover songs seemed to be the flavour of the night as Delamere added their own unlikely spin on Candi Staton’s pop classic: Young Hearts, Run Free. Unfortunately, some members of the audience started to file out during the latter half of the set, however this could be attributed to the group that migrated upstairs to continue watching Rob Greens set. Delamere appeared unperturbed by this however and continued in fine fashion, with an overall strong set from a promising young band. With some upcoming shows already sold out and their debut on the brink of release, I would not be surprised to see the band back at The Bodega very soon.