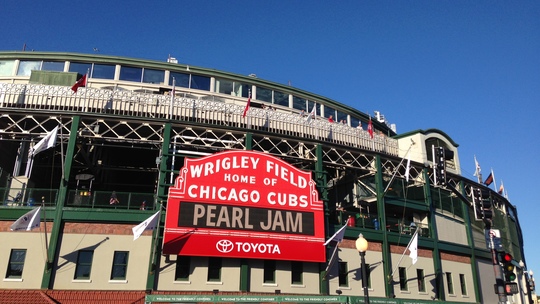 Seattle gave birth to Pearl Jam. Chicago gave birth to Eddie Vedder. This was no more evident over the "Weekend of Pearl Jam" at Wrigley Field. While the iconic baseball stadium hosted two shows, the entire Wrigleyville neighborhood was transformed into a mini (or perhaps not so mini) Pearl Jam haven for local and international fans. Several PJ pop-up stores were created for the 4 days of festivities and bars and restaurants were packed on the off days of the shows.

It is no secret that Eddie Vedder is as die-hard of a Cubs fan as any one to ever support the Northsiders and this was made loud and clear on both shows. He even authored and recorded a tribute song to the Cubs (and their lovable loser fans) several years ago (more on this later).

As the sun finally set over the home plate grandstand, Pearl Jam ended their 2016 tour with an all-out rock performance as good as any I have seen in 2016. The band launched into a 36 song, double encore, 3+ hour show starting off with a great rendition of 'Oceans'. A surprisingly early play of 'Better Man' on the 4th song set up the on deck classics of 'Corduroy', 'Why Go', 'Animal' and 'Given to Fly', which was dedicated to current Cubs Manager, Joe Madden. Over the course of the evening, Eddie would talk about his connection to Wrigley Field, Ernie Banks and the Cubs, as well as the first time he ever saw a bong in use (from the old Budweiser rooftop)

On 'Black, Red, Yellow', we were all given some on-stage entertainment when NBA great Dennis Rodman showed up on stage (in his Bulls jersey) and lifted Eddie in the air while he sang.

During 'Lukin', Eddie and crew actually stopped the show as he witnessed a male member of the audience being abusive to a female attendee and had security throw him out.

During the double encore, Pearl Jam busted out great covers of 'Throw Your Arms Around Me', 'Last Kiss', 'Sonic Reducer', 'Crazy Mary', 'Surrender' (you can't play Wrigley without at least one Cheap Trick cover) and Neil Young's 'Rockin' in the Free World'.

About 4 songs from the end, Eddie played his original 'All the Way', a song as mentioned earlier as an homage to the Cubs and their 108-year title drought. Even the 7 or so White Sox fans in attendance remained silent as Eddie sang and video of the Cubs played... which left us all wondering... is it gonna happen?