The Temper Trap, Thank You! 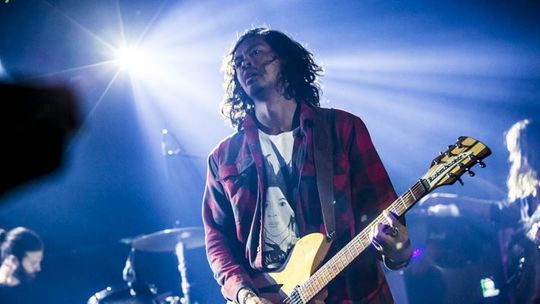 Everybody knows the song, the high pitch that sets the tone. But do they know the band. The other 2 albums and other mighty songs. "Sweet Disposition" is quite possibly one of the greatest songs created, but does the world know about The Temper Trap.

Album number one 'Conditions' was released in 2009 which featured "Sweet Disposition" and is what put The Temper Trap on the map. It was in 2010 when I first saw them live and yes, I fell in love with the band. After 'Conditions' being my go to record and learning every word, it was where the love grew.

It was in 2012 when The Temper Trap debuted their self titled second album but something wasn't quite right there. It was a good album but just not as good as 'Conditions' but then something awesome happened...

...listening to the Radio I hear this amazing song and I think "What is it?" eager to know. "Fall Together" by The Temper Trap, four years later the boys are back!

They are indeed back with third album 'Thick as Thieves' which I am extremely happy to say is amazing. Maybe better than 'Conditions'.

Performing a very intimate show at The Lexington in Angel, the room was packed and sweaty but we were ready. Straight into it the guys open with "Thick as Thieves" getting the crowd dancing. Obviously the set list consisting of new tracks such as "Alive" and my new favourite "Burn" these songs convey that The Temper Trap have been away and working damn hard. Captivated by their performance, the band are a pleasure to watch; lead singer Dougy Mandagi is just exceptional. His vocal range and stage presence is the ultimate gift every musician seeks.

Throwing in some oldies such as "Love Lost" and "Science to Fear" my younger self from six years ago is screaming with happiness. This was the ultimate set list but that's just because The Temper Trap produce such amazing songs. It's so good to have them back and bring the joy I once forgot about, I'm even getting ready for their next show.

It's the moment everyone has been waiting for, all the phones come out and me and my friend look at each other and just scream with excitement. "Sweet Disposition" fills the venue with happiness and pleasure. Dougy then walks into the crowd and we sing as one. It's a moment, a night, a gig never to be forgotten.