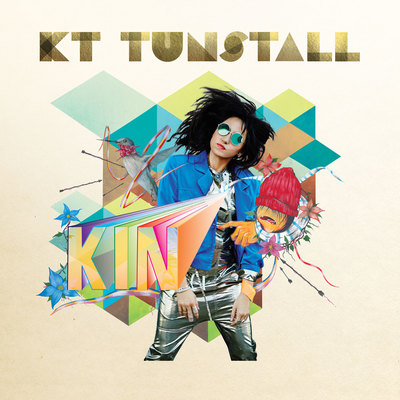 Not counting her Christmas album this album ‘KIN’ is the sixth from KT Tunstall since 2004’s ‘Eye To The Telescope’. Her first big break was her magnificent performance of “Black Horse And The Cherry Tree” on the BBC’s ‘Later With Jools Holland’ show in 2004. This new album was recorded in Los Angeles which is where KT relocated in 2014. It was produced by Tony Hoffer who has worked with a wide and diverse group of artists including Beck, Dave Gahan, the Kooks, M83, Ladyhawke and Goldfrapp.

The album is clearly well produced by Hoffer and has a really open almost live feel about it. This especially evident in the album’s first two single releases; “Maybe It’s A Good Thing” and “Hard Girls”. “Evil Eye” was released as a part of the Golden State EP earlier this year. Whilst ‘KIN’ is not too much of a departure of what we have come to expect from this very talented singer, songwriter and performer it does enhance her considerable talents, particularly as a songwriter. I am really looking forward to seeing these songs played live. Album opener “Hard Girls” draws you into this long player immediately and the whole flow of the record keeps you right there and interested throughout.

All the songs are written by KT apart from “Two Way” which was co-written with fellow Brit James Bay. He also performs on the song as a duet with KT. Their voices work really well together on this alt-country style tune, although listening to them individually I never thought their voices would fit so well. It is particularly effective in the harmony, counterpoint approach as the song heads for its climactic conclusion. Many of the tracks on ‘KIN’ feel familiar from the first listen. I don’t mean that they sound like other stuff simply that they worm their way into your head, and maybe even your heart in some cases, in the nicest possible way. It feels like KT has found her pure pop groove and is very comfortable with it. “On My Star” is a gorgeous, romantic love song which perhaps shows a more open and vulnerable side to KT Tunstall. I can see this becoming a wedding first dance choice, particularly among KT’s fans.

The title track “KIN” is a wonderful ballad which at times had vocals similar to later period Kate Bush. It is a really chilled song although I am not entirely sure what it’s about yet. “Everything Has It’s Shape” maintains KT’s pop credentials as for me it has the feel of a little influence from Swedish pop giants Abba. If you’re a KT Tunstall fan you will undoubtedly be buying this album. If you’re not a fan, or maybe don’t think you are, then I suggest that you give this record a shot. I have already listened to it three times and there will be more plays, of that I am sure!