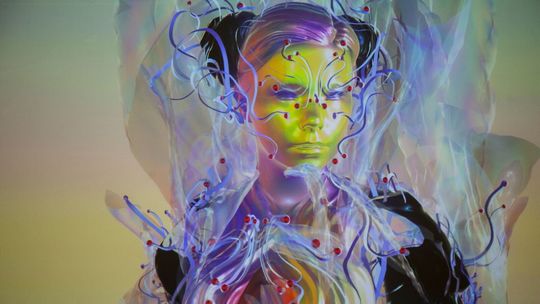 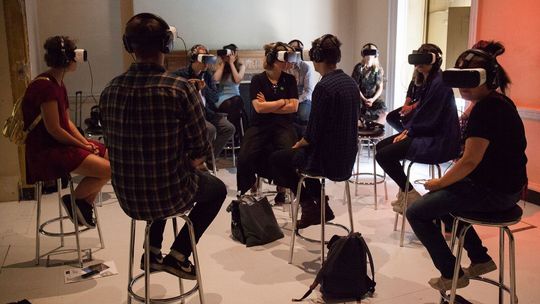 Chief of bending musical genres, Iceland’s Björk has brought her Digital exhibition to London as part of its global tour.

The exhibition, a series of interactive music videos for the tracks released last year on Vulnicura, is as weird and wonderful as you would expect from an artist who is never dull. With the album being leaked ahead of launch (in turn forcing the official release date to be brought forward), the exhibition is still something of a work in progress - not all videos are completed, but those that are are hosted for visitors’ viewing in the bowels of Somerset House. Each video has been produced by different directors, with their individual styles creating a range of work as varied as the music they’re supporting.

There’s no fanfare as you travel around the exhibition, ironic perhaps given the fact it’s showcasing works of the ever-eccentric Björk, simply different sparse rooms that host each of the tracks. The exhibition begins with a showing of ‘Black Lake’, with two screens at either end of the room playing different material. Visitors are encouraged to move about the room to get various viewpoints of the videos, which was initially a piece of work commissioned by New York’s MoMA.

The rest of Björk Digital is hosted on a range of VR headsets, a form of technology which is fantastic for the levels of interaction that it can create, but rather stunted as of the poor visual resolution. As the technology is new it’s bound to be in its formative stages, but it’s refreshing that Björk is looking to integrate the contemporary tools within her works to produce something original and - in parts - daring.

‘Stonemilker’ is shot on a desolate beach by a 360 degree camera, with visitors needing to rotate to keep track of Björk as she walks in circles during the video. It’s rather simple, but given the dramatic backdrop and beautiful, harmonic song, it makes for a rather stunning piece. ‘Notget’ also features a walking Björk, but - bizarrely - as a glistening coloured giant the visuals repeatedly pass through as sparks are raining down upon you.

‘Mouthmantra’ on the other hand is a difficult video to watch, with director Jesse Kanda quite literally putting you in Björk’s head courtesy of warped shots of the singer’s mouth and throat. Imagine watching Innerspace, but after taking mushrooms and going on the waltzers. In comparison with the other tracks on Vulnicura, ‘Mouthmantra’ is one of the more intense numbers, admittedly fitting for the video but only to enhance the feeling of uncomfortability.

To the credit of Björk’s Digital showcase, after watching the videos it’s difficult to imagine the songs existing without them. The gap between visual and sonic art has been bridged, creating bodies of work that extend beyond a simple CD track. As an exhibition Björk Digital does lack the structure and aesthetics that you’d usually expect with an art show, and even though the visual graphics can sometimes feel similar to an old video game, the way everything is blended together is outrageously brilliant. Much like the artist herself.