They're Gonna Do To You What They Can Do Best 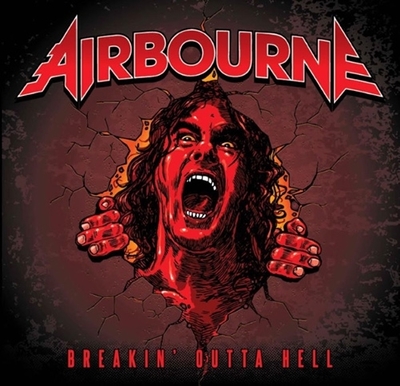 Let's get one thing straight at the outset: if you're reading this to find out 'where Airbourne can go next musically', you're missing the point. Joel O'Keeffe said quite pointedly in a recent interview that he feels it's disrespectful to the fans if a band changes its style. Just as Motörhead kept broadly to their own style, Airbourne plan to keep on being Airbourne and playing rock 'n' roll.

The biggest pitfall in such an approach, of course, is that there's a fine line between staying true to what's gone before and rehashing it, and sometimes Airbourne stray over that line. Airbourne have been gathering critical comparisons to AC/DC from the outset, but the riff to 'Thin the Blood' immediately calls to mind 'Beating Around the Bush'. The double entendres in 'I'm Going to Hell for This' ('Like a hurricane, she's blowing my brain') show that Joel O'Keeffe keeps his brain exactly where Mick Jagger kept his when 'Honky Tonk Women' came out (and arguably ever since). Perhaps most damagingly, the title track to Airbourne's latest sounds uncannily like the title track to their own début - same rhythm, same theme of driving away from some bad situation, even the same habit of backing vocals repeating the title in the chorus.

Fortunately, the upside to keeping things constant, namely, that you get your fill of what drew you to a band in the first place, is also present in spades. There are lots of good, solid rock 'n' roll riffs, especially on 'Get Back Up' and 'It's Never Too Loud for Me', and lots of solos that just seem to flow naturally and fit effortlessly. With David Roads hinting at a possible live DVD in the works this tour cycle, there's also been even more attention given to how songs will translate on stage. 'Rivalry' has a clap-along intro that builds dramatically, while 'When I Drink I Go Crazy', as well as boasting a pretty excellent bass line, sounds like it's made to be extended live, with a point in the middle for Joel to open beer cans with his head, break the no-climbing clause in his contract or invent some new crowd-pleasing move.

So far, so much continuation of what's gone before. If you want to find any differences in Airbourne's approach between albums, you have to look at the details. For instance, unlike the rock 'n' roll bands who began in the 60s and 70s, these days it's perfectly OK for a band with a macho blokey image to write a song all about cunnilingus, and out of the sex-themed songs on the album, 'Down on You' is probably the best. Finally, when you look at the title of the closing track, 'It's All for Rock 'n' Roll', you'd probably think: "Oh, it's Airbourne. so of course there's a song about rock 'n' roll". It's actually as serious as Airbourne ever get, because the album ends with a tribute to Lemmy. Get ready to raise your metal fists and/or JD and Cokes and join in that singalong chorus.

For the most part, though, 'Breakin' Outta Hell' lives up to Ryan O'Keeffe's estimation that there aren't any grand ideas behind it and it's just about having a good time. Airbourne don't really 'explore new avenues' musically: they're happiest thundering down the Fury Road, way over the limit with a few girls in the back. Fortunately, it's a hell of a ride.