Who's A Sweaty Boy Then? 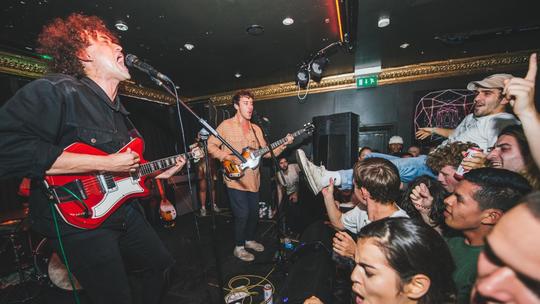 “We’re not here for a nice time, we’re here to play rock and roll”.

True to their word, this is exactly what the Parrots did. Playing Dalston’s modestly-sized Victoria, the Madrid three-piece as rough with their live show as they are on the recently released Los Ninos Sin Miedo. It’s an approach reminiscent of the Black Lips – music that’s great on record but even greater when played live, all scratched and dirty.

The only thing faster than the pounding drum on ‘Let’s Do It Again’ was the audience’s escalation from a jumping mass to a sprawling mosh pit, there being so many crowd surfers that sometimes the stage wasn’t visible from the floor.

Fellow Spaniards Los Nastys were a perfectly suited support act for the rowdy evening, with their orchestrated yet relentlessly thrashed music building excitement before the headline act. The Parrots came to the stage amidst thrown beer and frenzied howls, and their borderline animalistic sound was fully utilised when tearing through their hour set. ‘A Thousand Ways’ and ‘Too High To Die’ were the standouts from a haze of buzzing garage-punk, the latter an aptly titled number given the group’s obvious inebriations during the performance. Not that this was to the detriment of the gig; the loose inhibitions and rolled eyeballs only added to the raucous design.

‘No Me Gustas, Te Queiro’ turned everyone Spanish for three minutes, the audience shouting along with the panache of a dad trying to order paella when holidaying in Benidorm. Las chorizo and prawnos, gracias Miguel.

In true Parrots fashion the gig came to a distorted, squealing holt with a stage invasion, giving a freshly positive spin on the notion of being shambolic. You wouldn’t have it any other way.