The Spice of Life, London

REVIEW gig The Purple Lights The Spice of Life, London 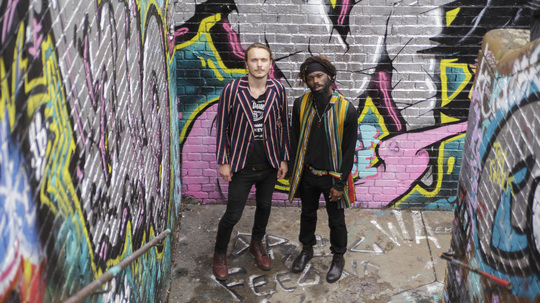 You can say what you like about East London duo Purple Lights, but there’s one thing you can’t deny. They work hard.

From the moment they take the stage in the basement of Soho institution The Spice of Life, they’re getting busy. Singer and guitarist Rob Fincham chops out a reggae riff and locks it into his Loopstation, then adds a bassline and a vocal sample with a hint of The Art of Noise about it. Akeba Fridye, meanwhile, maintains a heavy, rocksteady reggae beat behind his kit, throwing in elaborate fills every few seconds and augmenting Fincham’s strong vocals with his own honeyed tones.

It’s a big, impressive noise they make, and all the more impressive that it’s made by only two of them. But that’s only half the story. What makes them so interesting is their melting pot of influences – there’s a very authentic roots reggae bedrock to their sound, but when it’s fused with Fincham’s psychedelic flourishes and riffs, the results are something truly original. Original, but at the same time so simple and effective you wonder how no-one had come up with it before.

It also helps that they already have an uncanny knack for penning a memorable tune. The lighter and poppier ‘Not Alone’, which is top of the setlist tonight, is clearly among their catchiest songs, but the heavier numbers like ‘Trigger Man’ and ‘No Clue What You're Doing’ – bringing to mind Rage Against The Machine’s combination of funk and metal flavours as well as their social conscience – are just as enduring.

There’s no outing for the rhythmic onslaught of the band’s debut single ‘Warning’ tonight, but even without it they have a set with impact, variety and plenty to say for itself. Let them light up your life.