Amaranthe Seek To Divert The Mainstream 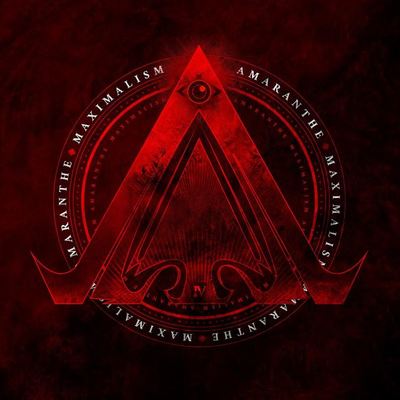 At first glance, one might be forgiven for doubting Olof Mörck's claim that 'Maximalism' is Amaranthe's manifesto to the world. They had a go at social commentary in places on their last album, but here there are a few songs about love, a few about partying, one about anger but with no clear object and some, like opener 'Maximize' and 'Fireball', that make no discernible sense whatever.

'Supersonic', however, hints at what Mörck may mean. As well as some good heavy 5FDP-like rhythm, it has a chorus about how Amaranthe combine lots of different influences, including some often derided in rock circles, because they want to: "We are not ironic". (Nevertheless, although they use the word 'polyphonic' in its original sense of having multiple sounds, it also means a turn-of-the-century ringtone: the keyboards on 'Maximalism' sometimes sound similar enough to old mobile phones for this to have an ironic effect whether they want it to or not.)

As I've written before, there is a place for bands that serve as gateway acts to get people who grew up unfamiliar with rock to start exploring it. If the fact that 'On the Rocks' has a chorus that sounds like a party dance at a holiday park gets people who wouldn't call themselves rock fans to listen long enough to appreciate Mörck's guitar pyrotechnics, then that is a result. It's also perhaps not so surprising, even if it does spoil an otherwise decent song from a rock perspective, that Elize Ryd tries to sing 'That Song' like an R&B singer. Given that the guitar parts to 'That Song' sound like Doro's self-titled album, Ryd had to do something you wouldn't expect to hear in a rock song to avoid comparisons with Doro.

Although Amaranthe's main modus operandi is to intersperse guitar work rockers will love with repetitive, often distorted vocals more at home in the pop world and rhythms at the faster end of industrial, there are times when their sound is less hybrid. 'Fury', with proper power metal drumming, keyboards that sound more Sabaton than Sagem and effective use of Henrik Englund Wilhemsson's harsh vocals, is the heaviest Amaranthe go. Meanwhile, 'Limitless' is total Europop and closer 'Endlessly' (more irony, finishing an album with that title) is a violin-filled ballad: as the instrumentation to this one doesn't really rock, Ryd's penchant for doing the unexpected goes the opposite way and she channels Anette Olzon.

Amaranthe have spoken in the past about wanting to go out on tour with various pop acts. The direction they've carved out for themselves with 'Maximalism' suggests it might be a good move for them. With everyone surrounded by pop on TV and in shopping centres, rock fans already know whether or not they are, like Amaranthe, also into mainstream sounds. Those who are not will probably not find enough to satisfy them in 'Maximalism'. However, this genre-bender has what it takes to get a non-rock crowd dancing in the aisles.