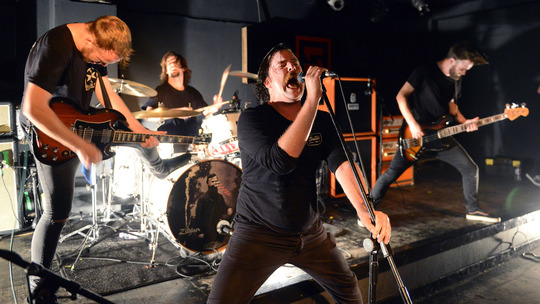 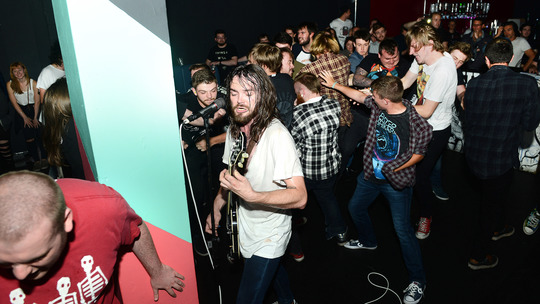 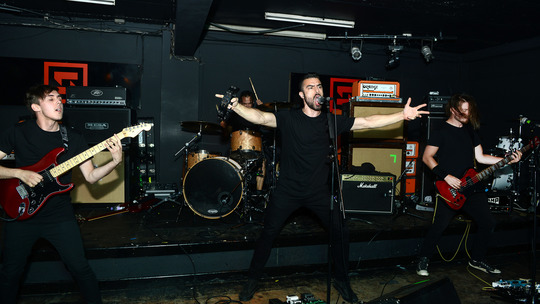 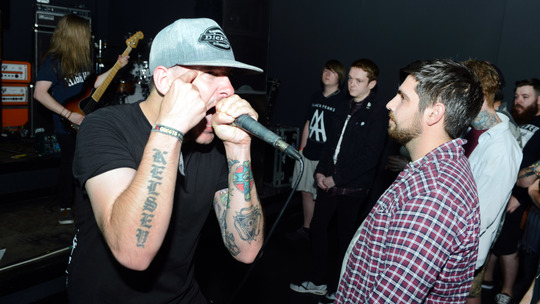 Much to the attendee’s surprise, the second (and relatively unused) room of Sin City was chosen instead of the main room for the Black Peaks Friday feeling show but by the time the early hours had crept in, it was doubtful those present could have done anything more fitting to fire up their weekend.

Local metal quartet Continents were shortly added to the events line-up, opening the event. In this very rare instance however, they had difficulty awakening their onlookers from the early rigidness. Woes of financial and touring struggles noticeably burdened them, which explained why they appeared slightly defeated. Their hearty and heavy performance also did not go unnoticed however, with front man Phil tenaciously attempting to liven things up as the remaining members hit hard and chugged fast to conclude a commendable metal set.

Not often do you find a rock act sporting a tambourine but when it is respected like a badge of honour, it slowly becomes a welcomed attribute to a band only two years old, but already honing a fast and different sound to their colleague’s categories. This Be The Verse play a collection of their tracks including “Consequences”, married to a memorable introduction bouncing between tom-toms and snare drums.

Sharing the same name as the creator of the Achaemenid Empire, Cyrus King jumped between said instrument, guitar and raging vocals with an interesting swaying motion as the band continued to play their brand of progressive rock, broadcasting their music and fist raising message to the welsh crowd in a positive light but still failed to raise their adamant pulses.

From every past experience of the third band to play Sin City, four-piece HECK yet again provided damning evidence that they are indeed the thrash-packed bread and butter for any rock-orientated meal. Ramming guitar grit and mathcore madness down the audience’s throats, Matt Reynolds and Jonny Hall viciously fired off a microphone-melting vocal ferociousness, finally satisfying everyone’s insane cravings.

Their fascinating embrace of your ‘no rules’ persona ironically radiated a radical necessity to pursue their movements, both metaphorically and physically. As Jonny and Matt committed to rotating between climbing everything standing higher than four foot (including the fans themselves) and using unprepared individuals as replacement microphone stands, the general crowd response transformed from sluggish, half hearted rockers to enforcers of undiluted vehemence.

As HECK left their flood lamps undisturbed, they added just the right amount of gravitas for Black Peaks entrance. For fans of Deftones and Tool, front man Will Gardner trailed behind his band members before he, Joe Gosney and Andrew Gosden introduced themselves with the first four words of “White Eyes”, escorted by Liam Kearley’s big drum beats. There was no hierarchy in this pack, just four kings who shared an equal measure of veneration from their now, very motivated subjects.

From peak reaching “Saviour” to the bellowing bass riffs of “Say You Will”, their natural elegance in radically leaping from pinnacles to sharp plummets really leaves their music majestically unpredictable. Will’s long hair and fantastic moustache slapped away the possibility of monotony as he mirrored a hazy image of Chino Moreno and the quartet moshed with extreme force (with those on the venue floor following suit).

“Glass Built Castles”, strategically used as a closing track, undeniably defines them as great songwriters. Inspiring fists with extended fingers to be strewn towards Mr Gardner as they dramatically soldiered on into the popular chorus and through the heavy perspiration, the relatively small crowd (likely gathered from those who could not make the Cardiff show the previous evening) achieved the rise to an apex of excitement and adrenaline that metaphorically lit up the closing set like throwing a Christmas tree into the pit.