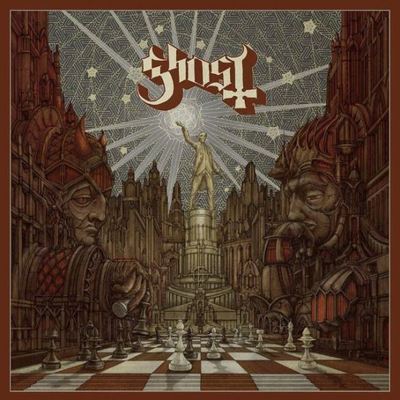 It was with some apprehension that I awaited Ghost's latest EP, after an interview a few months ago where one of the Nameless Ghouls said they planned to do a few covers to introduce listeners to a new sound and cited REM as a source of inspiration. The one newish band with a heavy non-bluesy sound who get the media attention they deserve and they're going to do what?! Well, I suppose Flying Colors mentioned Razorlight as an influence, but mercifully it's not apparent in their sound. Maybe a similar process was at work, or maybe the REM comment was another of Ghost's attention-grabbing gimmicks, because my first thought on hearing 'Popestar' was: "Thank Satan, it sounds nothing like REM!"

The degree of change from previous Ghost efforts is debatable too. The three strongest tracks on the EP are all rich in the Ghost sound we know and love, complete with spooky keys, heavy guitar and headbanging rhythms. Original track 'Square Hammer' sounds made for singing along, even if one might question the point of swearing that you're on the level before the Father of Lies. 'Nocturnal Me' makes perfect sense as a cover because of its innuendo and Ghost have really made the riffs thunder. If you weren't familiar with the original, you'd never guess it was written by Echo and the Bunnymen. 'Missionary Man', on the other hand, still has the big 80s vibe to reminds you that it's a Eurhythmics cover (and some accomplished female backing vocals: wonder if the female Ghoul playing bass on Ghost's US tour can sing?), but nevertheless, Ghost make it sound menacing.

The other two covers on the EP are the odd ones out. Try as I might, I still can't figure out why Ghost chose to cover 'I Believe' by Simian Mobile Disco. It doesn't seem to fit with anything you'd associate with Ghost and there's nothing in it to spark one's interest. 'Bible', originally recorded by Imperiet, works somewhat better. Some critics have claimed that Ghost are exploring the light side of the Force by covering this track, but listen closely and it's a story of how people screwed up the world, so not that distant from their usual themes. With a choir in the background and a warmer, more open sound than standard Ghost fare, it calls Peter Gabriel to mind. If they took this direction entirely, I'd miss the old Ghost, but unlike 'I Believe', it's possible to see how they could combine the new elements in 'Bible' with their existing sound to rewarding effect.

On the whole, then, 'Popestar' gives hope that Ghost will strike the right balance between evolving their sound and sticking with the Devil we know.