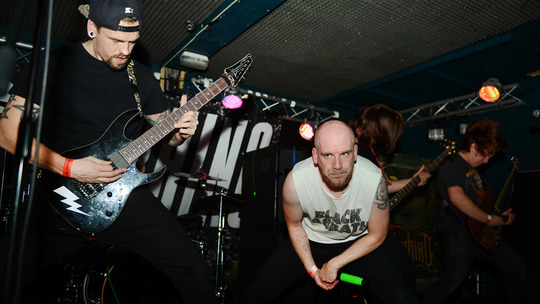 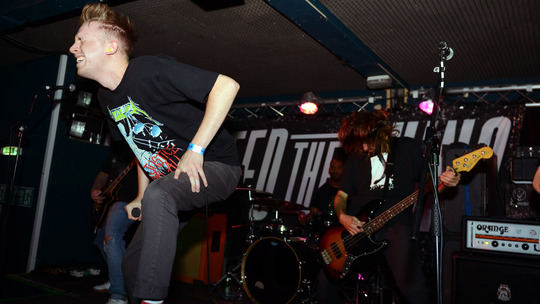 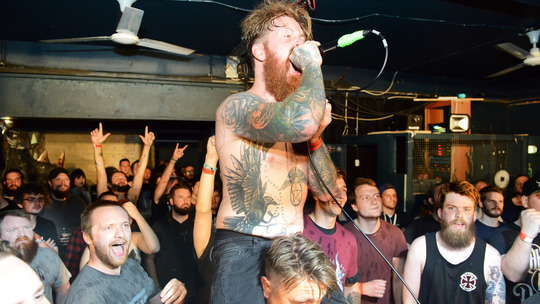 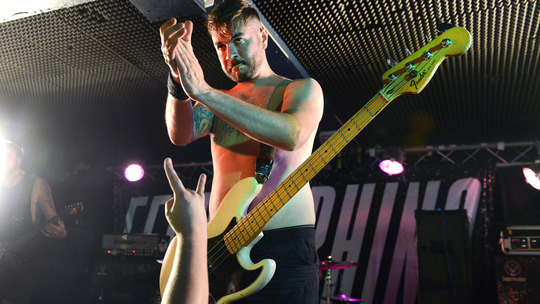 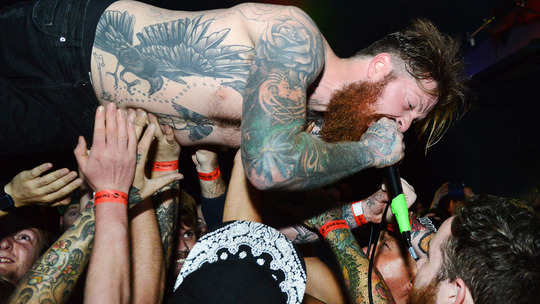 Anyone who would state that The Exchange in Bristol is a fairly large location, has either never visited the venue or is lying through their teeth. It is however, always interesting to see what bands can do with a space given to them and in this case, Feed The Rhino not only utilised it but proved that they are best experienced in close quarters.

Opening an evening of music is undeniably a difficult task to shoulder but for Bristol-based Koshiro, it appeared to be their prerogative to start it right. Although a thick mix of metal, hardcore and punk nurtured for six years seemed fairly appropriate for what was to come, the singing elements of their set seemed slightly questionable in what the correct key was. Luckily their frontman Ben Errington had his gut-wrenching scream sections to offer out, leaving the clean vocals to retreat into the corner.

Echoes of Cancer Bats could certainly be heard in their rhythms and seen with their frequent visits into the crowd, marking their obvious influence, but even that was not enough to get the crowd moving. Ending their show, “Creation Theory” opened on Michael Caine’s Interstellar reading of Dylan Thomas’s poetry before delving into the last four minutes of their adequate performance, which unfortunately did not resonate with their audience enough to initiate some movement.

Counting Days stepped up after the short equipment switch-over and immediately threw thrash and hardcore into the cooking pot, boiling blood and battering brains. The five piece have proven themselves in the past, playing to huge events such as Camden Rocks, Download festival and 2000 Trees festival this year, that they know what makes their audience throw violent moves on command (and that is not just from experience of their previous/current projects).

Ready and waiting to embody this observation, tracks from ‘Liberated Sounds’ exposed the mosh pit veterans and standing still at the front of the stage suddenly became exceedingly difficult. Thom Debaere and Alex Dench gave vicious examples of their screaming abilities (as well as lively stage personas) while Lasselle Lewis led the instrumental charge with some serious cymbal smashing and interchangeable fill, hi-hat and snare work.

The evening had operated on a standard building crescendo, in terms of act performance and audience reaction, but to say that the headliners blew the fish clear out of the water would be a humongous understatement. Instead, imagine Lee Tobin leaping off an Olympic diving board, strapped with dynamite and pulling pins from two grenades before hitting the water’s surface. Now translate this blast fishing bonanza into a live show and you might be close to understanding their power and passion as a band.

Hardcore heavyweights Feed The Rhino had returned after their twelve month hiatus, with a massive bang in the form of “The Butchers”. Flood lights ignited and so did the energy, encapsulating the very reason why Mr Tobin had forewarned in a press statement that “body armour may be required” at these intimate run of shows.

Material spanning back to 2010’s ‘Mr Red Eye’ and right back up to 2014’s ‘The Sorrow And The Sound’, the mosh pit became a minefield of injury possibilities, with those by the front crushed into the stage edge and over the floor speakers. Those involved barely batted an eyelid to their situation however, knowing exactly what was expected from the Kent quintet’s set (which was basically go as mental as humanly possible and climb whatever you can find).

As Lee got stuck in climbing over the crowd, pushing his sand-scagged vocals to their limits and making it very clear how much they had missed playing, Oz Craggs bluntly plugged away at the bass guitar as the Colley brothers insistently riffed away on the edges of the platform.

The first date of their tour was definitely one to remember and as the band regrettably reached the end of their setlist, they finished things up with monster track, “New Wave”, a brief crowd surf from Chris Kybert and a popular declaration from the front man atop the stage speakers, informing the cluster of faces that they would definitely be returning to the city to wreak lawless chaos once more.