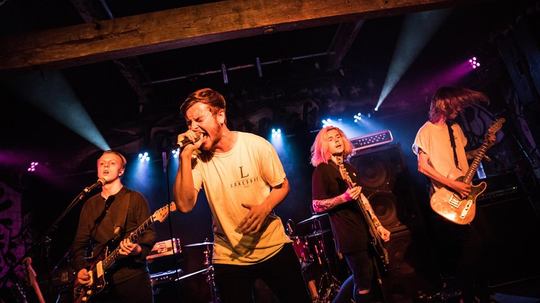 It's not very often I get the chance to review new music but it’s a job I love doing, I was asked to go along to review Milestones who were supporting Area 11.

The band from Manchester played at Newcastle Think Tank, which is a new venue to me, based in Times Square so easy to get to by road rail or bus.

Onto the music, Milestones look to be onto a good thing in my opinion ranking alongside You Me At Six and All Time Low with a similar style and quality sound. A bit emo a bit rock but with fab melodic vocals. The band's comprised of front man Matthew John Clarke, with Andrew Procter and Eden Leviston on Guitars, Mark Threlfall on Bass and Andrew Makin on Drums.

The Manchester five piece band covered their debut EP 'Equal Measures' , produced by Phil Gornell, who has produced for BMTH and the new release "Call Me Disaster". Producing catchy tunes with great vocals Milestones will hit plenty of these in their career as they are hardworking and very talented musicians.

It's always hard being a support act in the North East, actually it’s a hard gig just playing here, but I'm sure after tonight's show they will have gained a lot of new followers, me included!

Typically North East fans are hard to please but I didn’t hear anyone complaining as the band opened up the evening ready for the main event. And after the show driving home with friends, I'm sorry to say it wasn’t Area 11 that was the topic of conversation but Milestones, we can't wait till they are back in the area as this is one band we will be following with baited breath.