Forming Of A Future... 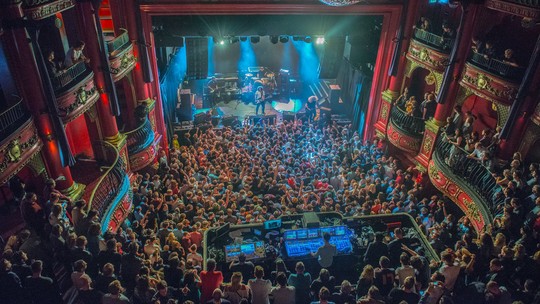 It’s not often that a band can come back after 8 years away and sell out London’s Koko, that’s about 1,400 odd tickets for a band who have received virtually no press or airplay, a pretty impressive feat and Milburn showed us just why they pull such a frenzied and loyal crowd.

From the opening notes of debut album opener of the same name ‘Well Well Well’ gets the whole venue going nuts, front to back and across all the balconies. Things slow down a little when they play new single ‘Midnight Control’, a return to form for the band that shows that their more poppy side.

Not the special guest anyone was expecting but Joe Carnall explains how it was drummer Joe Green’s dad who inspired them to pick up guitars, so on comes Glynn to help out on guitar duties for ‘Cheshire Cat Smile’, a fun moment for all and he was clearly loving being in the spotlight, go on Glynn!

They continue to storm through a set from both of their two albums, and there’s clear devotion for this band as every song people are singing along to every word, singles, b-sides and album tracks! They include the flip side to the new single, ‘Forming of a Fete’ which is a classic Milburn tune and is sure to be a classic amongst their live set.

Before we know it they are leaving the stage but Joe Carnall comes back on his own and is helped along by the crowd to sing back old favourite and acoustic romper ‘Roll out the Barrel’, it’s then that we’re treated to a b-side yet one of their biggest tunes, ‘17’, that they hadn’t put in the setlist but chucked it in as we were the “best crowd on the tour so far”, not bad when they’ve just finished a week of sold out gigs! They then finish with their customary closer ‘What You Could’ve Won’, quite apt because Milburn have taken a break yet have now come back to claim what they should’ve won! Lets hope that this comeback follows up with a 3rd album, because the new tunes have shown they’ve still got it in them, and there’s clearly appetite for it!