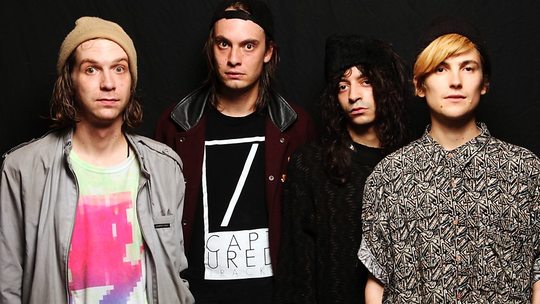 DIIV are a band plagued by reputation, with their previous troublesome exploits concerning cancelled tours, (alleged) sexism, drug problems and the resulting rehabilitation reported in a tabloid-esqe manner that often overshadows their music. Which, frankly, is unjust.

During their recent headlining of Camden’s Electric Ballroom, DIIV’s frontman, Zachary Cole Smith, broke his usual quiet politeness between tracks to address a previous article on the group that “stigmatised drug addiction”. Obviously the abuse of drugs should never be lauded and that nobody should be tarred with such stigma, but it’s through these negative experiences that DIIV have created some of their best music. Tracks are written with a lyrical depth that juxtaposes the often bouncy, sunshine-on-a-rainy-day guitar riffs – ‘Dopamine’ and ‘Dust’ the first that come to mind.

Such issues seem to be in the past however, sealed in a time crypt between the four long years separating Oshin and Is the Is Are. As their tour earlier in 2016 was cancelled for ‘health reasons’, DIIV’s recent shows are something of closure - a perfect opportunity for the group to showcase their talents and demonstrate their collective unity.

Before a backdrop of home videos, projected using equipment borrowed through a last-minute Twitter plea, the five New Yorkers flitted between tracks from their two albums. Usually filling a ninety-minute set with such a limited back catalogue would prove troublesome, but given the fact DIIV have thirty tracks to choose from – including 17 from 2016’s Is the Is Are – they were able to do so without too many problems.

Slight (self-inflicted) issues did arise when Smith opened the floor to song requests, a rock and roll democracy that strained under the screams from hundreds of fans. Breaking the set-list was brave but ultimately disruptive. Certain tracks were performed with aplomb, notably ‘Taking Your Time’ and ‘Healthy Moon’, but others such as ‘Air-Conditioning’ (“this song sounds like shit when we play at gigs”) and ‘Mire (Grant’s Song)’ (“how does this one go?”) were a touch rusty.

When a request for ‘Valentine’ was rejected for features samples that can’t be used in the live setting, booing from the crowd drew a reaction from Smith that seemed it would overshadow the evening. Fortunately, the ill-tempered cobwebs were blown away once the group moved back into more familiar territories, dipping from moody shoegaze (‘How Long Have You Known’) into The-Cure-gone-grunge (‘Incarnate Devil’) - the five members remarkably tight given the intricacies of their own musical roles.

When the tracks are heavier (‘Oshin (Subsume)’, ‘Doused’), it’s Devin Ruben Perez who holds the group together with thudding basslines, his nonchalance when playing live fascinating to watch and a complete contrast to the jolted guitar swings of Cole, Andrew Bailey and Colin Caulfield.

The evening’s standout though was the endlessly perky ‘Under the Sun’, its guitar intro resulting in a mass crowd-singalong reminiscent to bootcut lad rock. It wasn’t quite on par with the Loaded-era of ’96 Knebworth, but symbolic of a band that’s now clearly expanding beyond just their cult status.