Purest Emotion From The Purest Of Voices 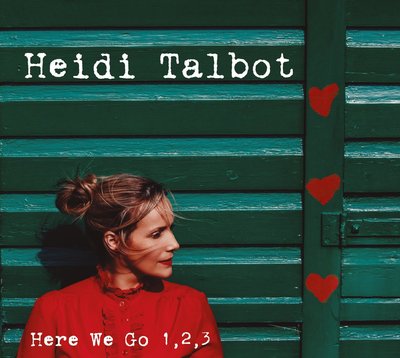 Heidi Talbot’s album 'Here We Go, 1, 2, 3' is the singer/songwriter’s fifth album. Listening to the title track I was immediately entranced by Talbot’s gorgeous Irish lilt that is traditional and timeless.

The second track, ‘Time to Rest’ is a beautiful tune that plays with the listener gently and takes you from fond memories to elegy for a life well lived.

‘The Year That I Was Born’ looks at the way that people shape us for good or bad. In it she looks at a picture of her parents and reflects on how young they both look, possibly seeing them with new eyes as they start the journey of bringing up a child.

‘The Wedding Day’ is a country and western style song that sounds like something Dolly Parton could sing, albeit in a very different style. If she hears the track, who knows? Interestingly, Talbot’s Irish inflection does have a more American twang to it at times, perhaps reflecting the time she lived over there and steeped herself in the music.

‘Motherland’ is a cover of a Natalie Merchant song. Never having heard the original, I can’t compare them, except to say that Talbot does complete justice to a tender, sad but uplifting track.

‘Tell Me What You Think Of Me’ is a heart breaking song about a break up that avoids the glib clichés of those songs in favour of words that are so sharp they could cut the listener. The next two tracks, ‘The Willow Tree’ and ‘A Song for Rose’ are both traditional style songs that you could imagine being played in an Irish bar after hours as the night ebbs to its close. ‘Chelsea Piers’ refers to part of Manhattan where Talbot spent a number of years and hints at the affection she had for New York mixed with the longing for Ireland that grew as she was away. The final track ‘A Stranger to Me’ brings a beautiful album to a close with a song of gratitude to people who stayed with her when she was struggling to work herself out.

It is a complete album that deals with birth, death, happiness, heartbreak, exile and homecoming with Heidi Talbot’s beautiful voice enhancing every emotion that the songs evoked in me.