Beth Kidsticks It To Leeds 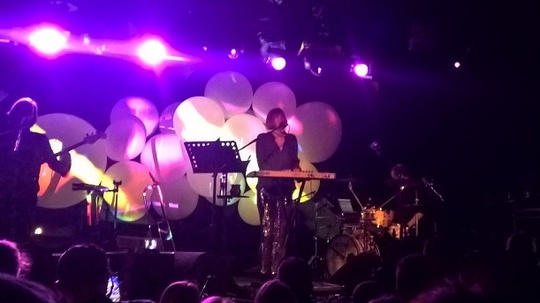 It is not far off twenty years since the first time that I saw Beth Orton and now here at the Stage in the Becket University, Student Union in Leeds I found myself watching her for a second time.

But before I talk of Beth I should mention Brodka, the fabulous support act. It is in fact Monika Brodka from Poland and she was the winner of the Polish Pop Idol back in 2004. Her band was very together and very talented the music has a kind of prog feel about it with some great pop hooks. They played a stunning cover version of Nirvana’s “Heart Shaped Box” which was almost unrecognisable from the original. Even the bands stage attire was different. Imagine Abba’s wardrobe being mixed up with the clothes for the cast of long ago UK TV series the Tomorrow People, which is how it looked to me.

Now it was time for Beth Orton to take to the stage of this rather excellent venue. She kicked her set off with what felt like a subdued version of “Moon” from her current album ‘Kidsticks’ which was released earlier this year. Even the magnificent “Galaxy Of Emptiness” didn’t pack the punch that it usually does when I listen to it. Maybe it was a slow build for Beth or maybe it was me that took a while to get into the swing of it. But by the halfway point of her show things had moved into a much higher gear. Maybe it was those disco trousers that Beth was wearing!

The projected light show against a set of multi sized balloons at the back of the stage was often spectacular even more so for its simple execution. Those balloons were a little reminiscent of the white orb like thing in 60's TV show the Prisoner though. “Snow” is a great song which for me works far better in the live arena. It was helped along by some very committed and I suspect long term fans in a reasonably sized crowd. Not a bad turn out for a Monday night I suspect. Beth’s little asides between songs were often funny and always intelligent. Especially when talking about being English. She is a talented and very warm entertainer who seems to really know her audience. “Pass In Time” is yet another beautiful song. Listening to her singing “Central Reservation” came as a reminder as to just how beautiful those lyrics are.

Beth played a song as part of her encore that I must admit I didn’t recognise, apparently it had been a request. Considering she hadn’t played it for some time and claimed not to remember how to play it I thought that she did pretty well. My favourite moment came during the encore with an emotional and powerful rendition of “She Cries Your Name” which is my favourite track from here classic album ‘Trailer Park’ from 1996. It’s hard to believe that this gorgeous album is twenty years old. So for me this was a good show from Beth Orton, I just felt that it took a little while to really get going. But when it did it was wonderful.