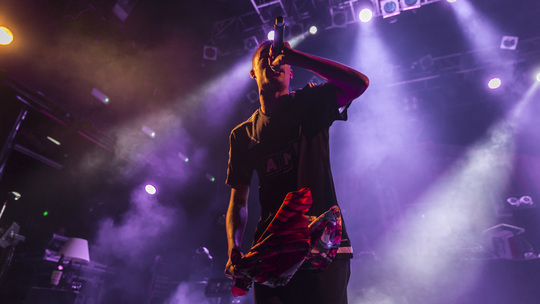 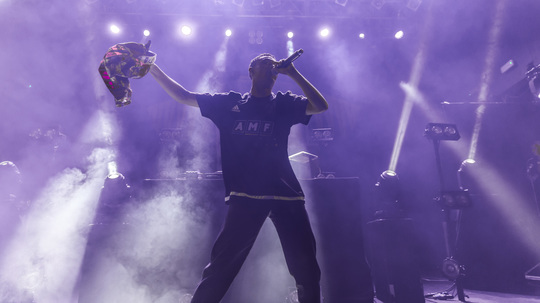 Picture this: the year 2046 and a group of middle aged friends are reminiscing about their first ever gig. Some might admit to having stood transfixed by Rihanna's moves, the ones still rocking their black eyeliner and ripped clothing will rave on about Bring Me The Horizon, and a couple might even chuckle to themselves and avoid mentioning the fact that they were staunch 'Beliebers'. But the coolest of the group, the ones who garner respect and kudos from all they meet, will hold their heads high and proudly state “Hey my first gig was Loyle Carner, at Koko, back in October 2016, on the Cantona Tour”.

And judging by last night's goings on, this is certainly a gig that will go down in history. Even though this wasn't my first ever gig (by some 25 years or so), I had the absolute honour to watch from the pit as the palpable excitement soared to fever pitch in the room and the excitement of one and a half thousand young people vibrated through the air.

As I arrived, the hip hop duo of OthaSoul - with all the Adidas and all the hats - were warming the room up with infectious bounciness. It was proper old skool with clever rhyming going on and that bounce that causes your arm to raise up involuntarily and move in time. OthaSoul are very much ones to watch out for, and a good choice for support tonight. As they finish and a DJ continues, with the backdrop of a gigantic red Eric Cantona football shirt, it's clear that this homecoming London leg of Carner's current UK tour is going to be pretty special.

With minimum fuss and an air of self-assured nonchalance, Carner strolled to centre stage and took his place at the mic. Opening his set with 'BFG' and it's raw sincerity about the overwhelming sadness which Carner felt after the death of his much loved stepfather, and with chants of “Loyle, Loyle, Loyle” ringing out through the audience, Carner took a moment to gather himself together and take stock of the heart-stirring emotion surrounding him.

Commenting that everyone he loved was in one place with him, and thanking his fans for making the show sell-out, Carner continued with the popular 'Stars and Shards' and it's irresistible laid back effortlessness. Keeping a tight grip on his late stepfather's Cantona shirt as he moved with grace and fluidity back and forth across the stage, Carner provided a further insight to the football references on this tour. “My Dad was an excellent musician, much better than me … and when I was young, he used to say that we'd tour the world – and I could be his little support act. But sadly, my dad passed away, and that never happened. So I carry around his Cantona shirt with me so that we can tour together … But, anyway, if I say 'Ooooh Ahhhh' – will you say 'Cantona'?”

Wow, well of course we all would, once we'd finished blinking away those annoying little specks of dust in our eyes, causing us all to simultaneously well up. Emotions were running high as kites. And then, partway through the fifth song, 'Florence' where Carner was joined by Kwes on the sweet sounding ode to the unborn sister he always wished for, there were frantic waves and shouts amidst the floorspace to stop proceedings. Initially it seemed that a fight could have broken out, but this would have been so at odds with the loving vibes in the room, and everything seemed very unreal at this point. Carner leapt down from the stage immediately to ascertain the situation, and it transpired that a young man had dropped to the floor and was midway through having a seizure. Nothing but respect for the way in which Carner took control here, directing the security team in what could have been a moment of panic, but staying calm throughout to ensure that help could get to the man as quickly as possible. Carner then carried on with a restart of his interrupted song, but it was clear that his thoughts were elsewhere. Thankfully a messenger came onto the stage a few moments later with the good news that the young man was well and was being looked after, and the mood visibly lifted once more.

The rest of the set continued at pace, interjected with personal anecdotes about the meaning and the feelings behind each of the songs. At times it was hard to keep in mind that Carner is only just into his twenties, he carried the night with such aplomb and a sense of assurity of one way beyond his years. Closing his set with best friend Rebel Kleff joining on the mic for most recent single 'No CD' it was plain to see that this is a young man going big places. His humble sensitivity shone through the entire 70 minute set, and his way with words and language play is definitely a force to be reckoned with. A debut album is in the pipeline, and if I were you, whether it's your first ever gig, or your fifty-first, I would catch him while you can.

Carner's Cantona tour continues in the UK this week, before he heads off on the European away fixtures.