"We Can Finally Live Up To Our Name" 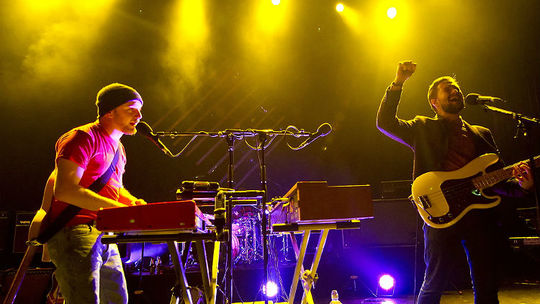 You’d have thought transitioning a record so sample-heavy into a live environment would be difficult, but if it was then the Kendal group didn’t let on. At their recent Roundhouse show Wild Beasts were excellent, performing with a swagger befitting their latest release. The neon-coloured album cover of 'Boy King' sat of the back of the set glowing ominously, overshadowed occasionally by some very active strobe lights – a perfect visual accompaniment to the chest-shaking deep bass and heavy percussion so rife on the new record.

It wasn’t until halfway through the set that Thorpe commented “Where are my manners, how are you?”; a statement possessing a modesty in full contradiction of 'Boy King’s highly-charged lyrical content. Especially considering it came on the back of ‘2BU’ (“I’m in your head, I’m in your dreams / I want your face, I want your skin”).

But any track from 'Boy King' would have the same effect. ‘Ponytail’ was introduced as “being not not about sex”, ‘Get My Bang’ is as self-explaining as the shameless title suggests, and ‘He the Colossus’ – an embarrassing previous school nickname of mine – tells you to “Stuff your chastity / Your ‘wait and see’, your ‘not ready’”. The material is risqué and bold, but as Thorpe remarked in a recent interview, “What terrible art I’d be making if my grandparents heard the record and thought ‘what a lovely man’”.

When older tracks were entwined within the setlist, well-timed bolts of nostalgia were delivered - notably through the more meticulous ‘Mecca’ and ‘Hooting and Howling’. Yet as soon as numbers from 'Boy King' started back up, you were half expecting semi-naked badly-tattooed ladies to come wandering through the crowd collecting pounds in a pint glass.

But fortunately this wasn’t the case, and by the time Wild Beasts returned to their roots to close the set on Two Dancers’ ‘All the King’s Men’ your pockets remained full of coins.