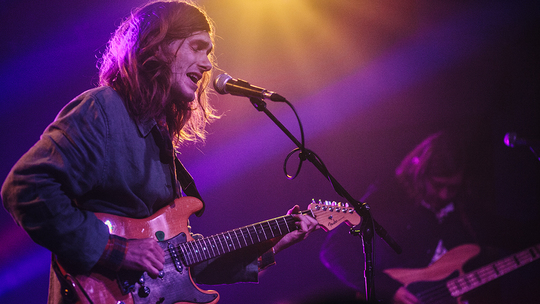 It’s not quite the sunny-beach-day vibes of Tame Impala or the spiral-patterned soft-hemp flared psychedelia of Jefferson Airplane, but Syd Arthur’s slightly scuffed take on the genre is original. Their closest comparison would be to occasional-dream-poppers Temples, just minus the refinery.

Syd Arthur sound as if inspired by pints of scrumpy rather than acid (although in certain parts of Dorset these aren’t mutually exclusive), their recorded material translating to the live setting without a hitch. The pounding bass-drum on ‘Apricity’ is relentlessly consistent, building (and holding) the pace of the track, and ‘No Peace’ suits the soft vocals of Liam Magill that sits effortlessly atop of (brother) Joel Magill’s walking bass.

‘Sun Rays’ is one of those well-crafted pop songs that sounds instantly familiar, yet possesses lyrics anything but (“There is a trapdoor to my heart / Space elevator to the moon”), and the layered riffs of ‘Ode to the Summer’ sound like a jazz-funk number stolen right from a 1970s time-capsule.

Occasionally blues licks sway into Syd Arthur’s music, seguing tracks into each other seemingly without too my effort. Everything about Syd Arthur seems genuine, with their set meticulous without any pretense.

2016 sees a decade since the four-piece released their self-titled debut album, and even though they’ve yet to have taken the musical world by storm they’ve been producing decent guitar-lead tracks that have been carving out a dedicated fan-base. With the soon-to-be-released fourth record coming out on Harvest (Richard Ashcroft, Best Coast, The Libertines), the company they keep isn’t so bad. Like a fine wine or Anne Robinson, some things just get better over time.