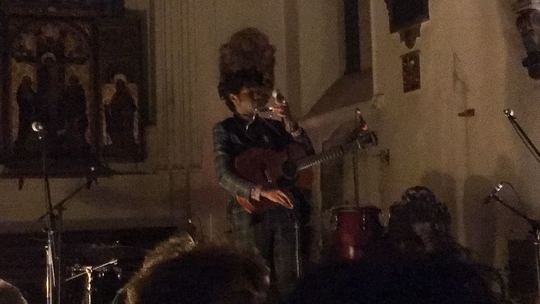 They're a band using simple compositions and without harmonic surprises with a secure base guitar and riffs left to the bass account. The superbly in tune vocalist carried the mark of the band, with a beautiful and powerful voice, making the instruments serve only as an accompaniment. The harmonic variation of the band was impressive making sure the songs did not all sound alike.

The second band of the night brought a surprise with an instrumental composition using an accordion and two guitars, one making the base and the other using a slide to make riffs that brought a different background sound. Despite the instrumental surprise, the biggest surprise was actually the voices; the lead singer was already very good, but the second voice brought him an inexplicable complement ensuring the best parts were their duets!

The instrumental and vocal surprises provided for wonderfully executed duets, however the band struggled a bit with their range of sounds, making the identity of the tracks slightly confused by the fact that all sounds were very similar.

Of the three performances L.A.'s was the best composition with band and the variety of instruments for the songs bringing different sounds without losing any identity. Starting with just a voice and guitar with simple but striking riffs made using the bass guitar strings and providing a folky footprint.

When the other members of the ensemble entered they managed to preserve the identity of the music, despite the increase in harmony, the acoustic guitar did not fade and the subtle guitar riffs were not lost.

In addition, the percussive elements were great bringing something that other bands did not bring... drums AND percussion, using bongos, cowbells and others to give it a bit more ompf (technical term). Another interesting and peculiar point was the relay guitarist and bassist, swapping instruments between them and even introducing a hacksaw as a friction instrument in one of the songs.