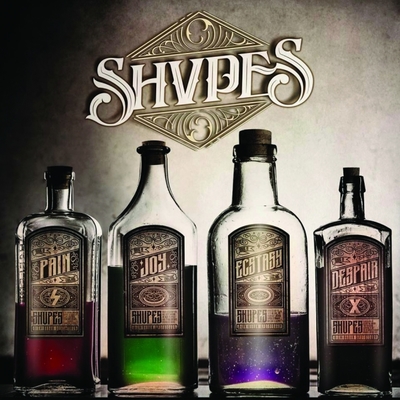 If the reviewer was half as modern as this album, this piece would begin with a meme, captioned: "That moment when you realise you're the wrong person to review something." When I know an act is in a subgenre I don't like enough to know what counts as good in it, normally I leave well alone.

Most of SHVPES' influences fall into that category. First and most obviously, there's the nu-metal that made me think I wasn't a metaller growing up, until years later when I got into classic metal. Overtones of Linkin Park can be heard in many industrial intros and loom especially large in the three songs about love gone wrong in the middle of the album, while the "Say it again" refrain in 'False Teeth' harks back to Slipknot's 'Pulse of the Maggots'. The energetic tempo and riff of 'State of Mine' suggest that SHVPES got something other than a raging hangover from their tour with Crossfaith (although if Griffin Dickinson's tales of the road are anything to go by, they probably got that too).

Other than that, there's a lot of metalcore influence, notably in Harry Jennings' drumming and the song structure. However, it's not the sort of BMTH/BFMV metalcore that many classic metal fans can get quickly. The harsher end of Dickinson's vocals suggest a more apt comparison would be Motionless in White, whose tour with Lacuna Coil saw a changeover of people on the barrier between acts of the kind normally only found at festivals. And as if that wasn't enough to make trad-metal fans, ahem, run to the hills, there are a few rap interludes. Rap-metal itself is of course an established subgenre, and there are even some examples of rock songs with a rap stuck in the middle that work. However, those songs are from much further back than SHVPES' chosen time period of influences, so their inclusion of rap is more reminiscent of how every late-90s/early 00s pop song seemed to have a rap in the middle 8.

That said, 'Pain. Joy. Ecstasy. Despair' is not just one long succession of WTF moments to anyone who doesn't self-identify as a millennial. SHVPES know how to write catchy choruses to get people singing along. There are a few attention-grabbing riffs, especially in 'Bone Theory', 'The Otherside' and 'Two Minutes of Hate'. The latter also has a splendid bass solo, as well as so many time and stylistic changes that the school of thought which says unusual fusions of genres are by their nature progressive may well claim it as modern prog. When the lyrics can be made out, they are often intelligent, as with the sharp critique of 'God Warrior', or the more original take on the old trope of being haunted by an ex in 'Smoke & Mirrors'. The most sustained lyrical imagery, however, occurs in the title track, where navigating through the upheaval of the modern world is described through the metaphor of explorers who sailed off the maps of their day. Anyone from a classic metal background will know where that method of using an epic story from another time to describe one's inner emotions comes from.

With the sheer number of sources on which SHVPES have drawn here, they have plenty of possibilities for future development. Most of those influences are not my cup of tea, but they are bands who've shifted a lot of albums, tickets and hoodies, so there's definitely a demand out there for this style of music. This could well be the SHVPES of things to come.