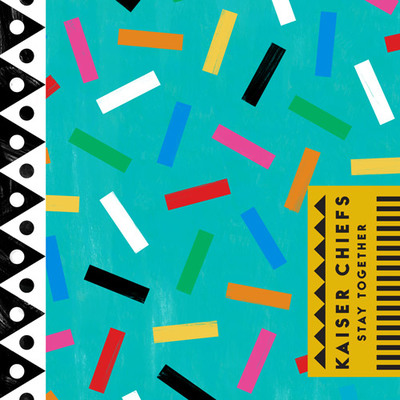 The title track of the new Kaiser Chiefs album, ‘Stay Together’ sounds like a David Bowie tribute to start with before breaking in to a Coldplay style chorus. It certainly isn’t what you’d expect from the Kaiser Chiefs, and it certainly didn’t indicate to me that this would be a return to form.

‘Hole in my Soul’ moves in to The Farm territory, sounding like ‘All Together Now’, and even including those very lyrics, but settles in to a traditional Kaiser Chiefs style anthemic chorus that will be great live. ‘Parachute’ is back in Coldplay territory with a meandering verse and underwhelming chorus. I really did expect a lot for this comeback, as a long term fan, but the music really doesn’t do their talent justice. When you think back to ‘Employment’ and ‘Yours Truly, The Angry Mob’ they were making exciting songs that could come from no one else.

Now they are trying to move in to other territories that existing acts have already colonized with more success. ‘Indoor Firework’ even appears to try to take off The Smiths with Ricky Wilson apparently channeling Morrisey. It seems like they are a group searching for their sound, which would be understandable if they were trying to navigate the tricky second album, but for Kaiser Chiefs it really beggars belief.

I don’t believe that a group should sound the same throughout their career, far from it, but when they do change it should be for the better. ‘High Society’ with Ricky Wilson trying a high pitched falsetto style really does not work. By the time the final track meanders to a close I’m ‘Still Waiting’ for an indication that this is a group that still has something to say. Sadly, this album gives me no such hope.