A Gentleman & The Scholars 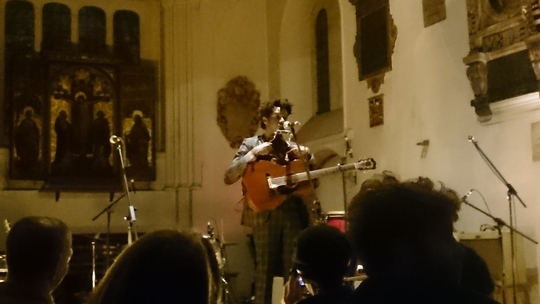 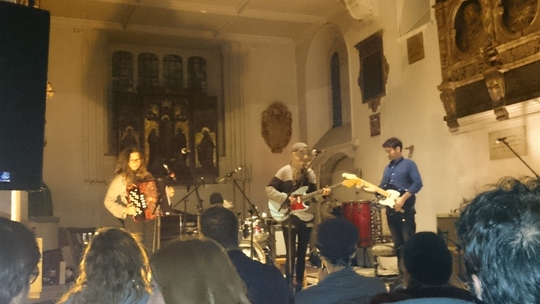 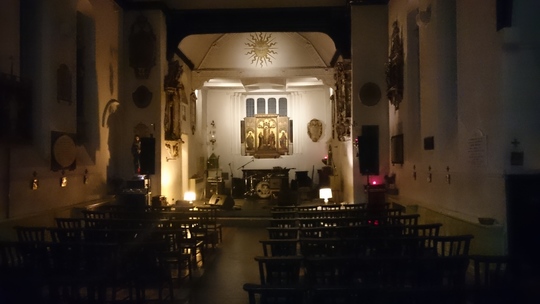 Having never been to a gig in a church before I was intrigued to see how everything would come together for L.A. Salami’s set at St Pancras Old Church.

The surroundings couldn’t be more beautiful, a small church nestled in the middle of a garden set slightly back from the hustle and bustle of St Pancras station. From the dimly lit gated entrance to the gorgeous decorative and ornate interior, the moment you entered the atmosphere was incredibly special.

First up was Amaroun, a three piece who’s lead singer’s voice set the bar for the evening. Exquisitely beautiful, understated but powerful, with an ability to literally fill the entire church with melody at any moment, yet the capability to provide hush tones should anyone be listening for a pin to drop. Very impressive.

One small criticism was their overly relaxed set up. All three musicians were sat down and slumped in their seats, the lead singer side on to the audience and it seemed like they were setting up for a jam session rather than a gig. It felt like they missed a slightly bigger opportunity to dazzle a new audience with their music. It later emerged the bassist had been called in 24 hours earlier but no one would have been any the wiser had they not mentioned it.

Next up was Annie Eve and what a delight they are. The church setting couldn’t have been more ideal for their set and the 4 piece excelled in delivering song after song of exquisite harmonies, beautifully crafted melodies and well-crafted beats. Their cohesion as a group was evident, they were confident in front of the growing audience and their delivery was sublime. The set was short, sweet and left a lasting impression… pretty much perfect.

Then it was L.A. Salami’s turn. I’d been listening to L.A.’s music a lot in the run up to the gig and although relatively new to his Bob Dylan esque story telling wizardry I’ve been impressed with what I’ve heard. Although it’s sometimes a little preachy many of his tunes convey a fantastic account of living in the mass sprawling urban environment.

L.A. comes across as a very approachable and affordable chap, his addresses to the audience highlight his experience in the live setting and his confidence encourage the audience to provide positive feedback from his music. He’s a wordsmith and a phenomenal musician who’s craft will hopefully see him go far. His band are a group of incredibly talented chaps who’s range and skill on whichever instrument they pick up sets them apart from the standard. In short, these guys are good.

However there seemed to be something missing for me. Maybe because they followed the near perfect Annie Eve or because this end of the folk spectrum isn’t specifically for me, I found myself drifting in and out of the last parts of the set. I also felt for some part like L.A. did as well. Not so much his concentration, that’s not in doubt, but more so whether he had other issues on his mind?

The evening had a mixture of highs and lows… the venue was stunning and the music superb (especially with the discovery of Annie Eve), but the drinks prices were silly… when the patrons of the local parish club together to put on “refreshments” after a Sunday service, there is a small cost to buying a slice of cake and cup of milky tea (the proceeds of which go directly to the church I presume), whereas as a Live Nation event the price of a can of larger or tiny plastic cup of Sainsbury’s own boxed wine was £3.50. It irked me even more as Sainsburys was a 2 min walk away and had we brought our own drinks it would have been considerably cheaper.

Also, although I appreciate this makes me sound even more like a grumpy old man (possibly a very fitting description), if you’re going to pay to watch a gig, for the love of god (couldn’t resist) watch the gig! Acoustic sets are delicate, the artists are bearing their souls and churches have a habit of echoing all sounds… so if you decide to have a rather loud ongoing conversation about your mate’s love life mid set, you’re not only describing the lurid details to the person next to you but having confessional with the entire congregation. Not the right time or place. Shame.