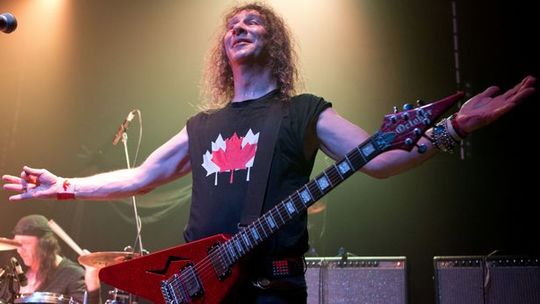 On paper, opening act Mystery Blue should have had everything they needed to get the crowd warmed up. Their lead guitarist was talented, turning out solid classic metal riffs and solos. Their leather-clad frontwoman had a decent range, as well as being curvaceous and quite obviously having no padding in her bra. Their lyrics covered eminently metal topics. Yet the early arrivals at the Academy 2 hung back and mostly stayed still. Why? It's a mystery.

Once they'd worked out where to hang up their backdrop, Rezet fared better. It was impossible to tell whether their lyrics were as witty as their politically charged intro tape, but not being able to make out the words because you're windmill headbanging to old school thrash is a nice problem to have. Most of their set was played at eye-popping speed, though on 'Breaking the Chains', they changed tempo in odd places to prove just how tight a band they were. Then as the icing on the cake, there was a fine cover of Motörhead's 'No Class'. Speaking of class, this young German band have more than most.

No sooner did Anvil hit the stage than Lips Kudlow headed straight off it again to play 'March of the Crabs' in the middle of the crowd. The set that followed drew heavily from Anvil's early history and their albums since the movie, but even though Islington council is now letting gigs carry on until 11pm, time constraints meant that new album 'Anvil is Anvil' didn't get much of an airing. Only 'Die for a Lie' and 'Daggers and Rum' made the cut: the latter went down better as it provided more audience participation opportunities.

There were still some Spinal Tap moments, notably when Chris Robertson finished his energetic bass solo at the start of 'Winged Assassins' by accidentally knocking Lips' mic stand over. However, there was also a lot of great musicianship as all 3 members did impressive solos at various points in the set, Robb Reiner's solos in 'Swing Thing' earning the most rapturous response.

And of course, as anyone familiar with Anvil will know, there is much more occasion to laugh with them. Lips' famous vibrator guitar solo during 'Mothra' is a case in point: his latest joke around it is to mime the suggestion that a woman in the front row might have used the toy for its intended purpose. (So guess who he picked? The mind boggles as to how he thought I might have worn most of the paint off it like that). The great and good of the rock world are not safe from Lips' mockery either, as he treated us to a wicked impression of Ozzy Osbourne before suggesting with tongue firmly in cheek that Sabbath's '13' might have been inspired by 'This is Thirteen'. Most of all, though, Lips laughed heartily at himself, describing himself as an old hippie, his transition to finally being able to make a living from music as retirement and Anvil's chequered history as: “I keep coming back, just sometimes the audience doesn't.”

Tonight, however, there was a respectable audience by the standards of the Academy 2, including some people who looked far too young and trendy to have witnessed Anvil's heyday. And apart from two blokes who kept asking in vain for the title track to 'Forged in Fire', they all got what they wanted. It was very heavy, so loud that people kept pushing forward after the encore, too deafened to hear that the venue had started playing Led Zep over the PA – and a lot of fun.