Empire Of The Sun

Sun Sets On The Empire? 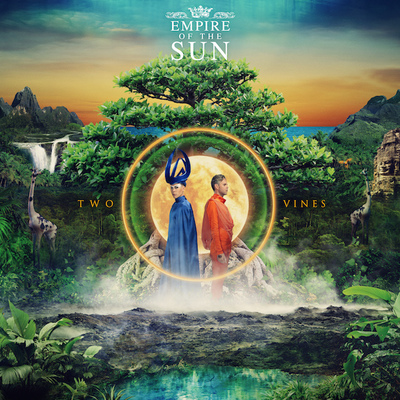 Empire Of The Sun

When Empire Of The Sun blazed a scorching trail onto the music scene with their first album 'Walking On A Dream' back in 2008 many music fans, including me, were both excited and impressed. Luke Steele, formerly of the Sleepy Jackson and Nick Littlemore of Pnau had found a rich vein of prog, pop, indie and dance that perhaps shouldn't have worked but most definitely did. It was a really classy and sophisticated album that was among the best released in 2008.

The follow up 'Ice On The Dune' was released in 2013. I felt that it really suffered from that often encountered 'second album syndrome' and was a bit lacklustre. Particularly given the bombast and sheer exuberance of the first. When I heard that there was a new Empire Of The Sun album to be released this year I was hopeful that it would be a return to the magnificence of their first album.

'Two Vines' is the title of their third album and frankly I don't see many good grapes and I doubt that it will prove to be a good vintage. The quality of the playing is first class and there is some interesting support from Wendy Melvoin of Prince's Revolution and Henry Hey and Tim Lefebvre who helped provide some of the excellent jazz styled sounds on 'Black Star' David Bowie's last album. There is also a major league guest appearance from Lindsey Buckingham of Fleetwood Mac on "To Her Door" although it is difficult to distinguish what Mr Buckingham contributed.

But in spite of all that I am left feeling a little flat by this record. Even after three listens it really isn't doing much for me. There are some good moments, opening song "Before" is pretty good and "High And Low" has potential. "First Crush" is a bit of an embarrassment, it is in my opinion the albums very lowest point. I am very disappointed in this release, it sounds like a band content to coast on past glories which is a real shame. Hopefully they will make amends with album four. But until then I will be avoiding 'Two Vines' in favour of 'Walking On A Dream'. But I would be interested to hear what other people think of the album. If this was a school report for Luke and Nick though I suspect that it might say in big bold letters COULD DO BETTER!