BluesFest is a music festival held in London. 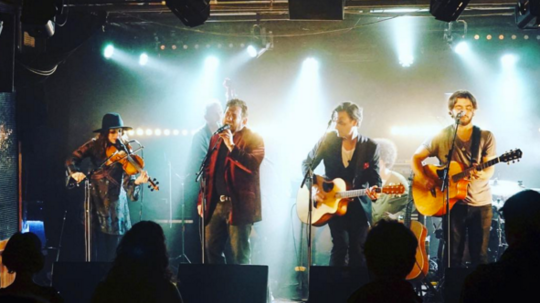 Having suffered a very public marriage break-up earlier this year with her former manager, to raising the subject of police killings with Hillary Clinton, Mary J Blige is certainly not one bothered by drama and her set at London's BluesFest showcased that just as much.

New York based JD & the Straight Shot started the party for us on Friday night with high-energy performance at The Brooklyn Bowl within the O2. The band are a strange combination of bluegrass and jazz… it sorta shouldn’t work, but it really, really does and we weren't the only ones who thought so.

Their song "Hard to Find" was featured in movie ‘St Vincent’ and "Violet's Song" was used in Meryl Streep's 'August: Osage County'. People are really digging the band! They performed a lot of tracks from their album 'Ballyhoo' which seemed to captivate the audience and we were enticed by each tale Jim Dolan told us about how each track was made.

The album itself is mainly acoustic, however, don’t think the show was lacking in energy or just involved a solo individual on a stage lamenting about lost love. The band has four members (including violinist Erin, who is so striking to watch… such an enigma).

A particular highlight was "Better Find a Church", which was super duper funky! It was a great set from the band and it had us pumped for the next stage of the evening!

It's hard to pick out specific highlights from her show. It's not often I enjoy a show consisting of solely singing, but she literally gives every song 200% and brings every emotion into every track, even from tracks like "Enough Cryin" or the gal pal anthem "Take Me As I Am".

She's an honest performer and gives us her truth. There was this really cool confessional segment where she performed hits like "No More Drama", followed by "Family Affair", I think by this point everybody is stood up. What an absolute repertoire.

Maxwell had a hard act to follow and we were surprised Mary wasn't top billing as we were only really aware of his cover of the Kate Bush classic "This Woman's Work" but nevertheless his set soars and his voice is simply phenomenal.

Maxwell and Mary J are both incredible performers and we half expected a duet, but sadly no such luck... the show was fab and different.