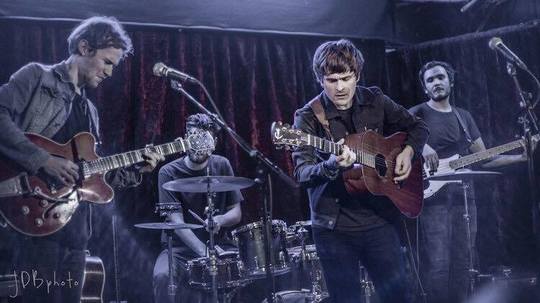 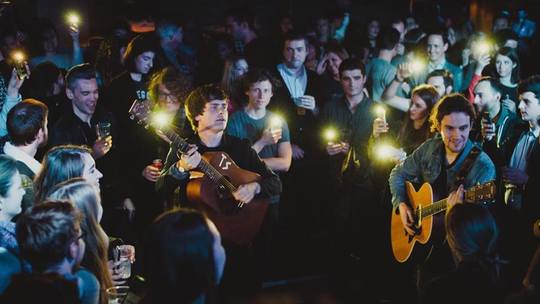 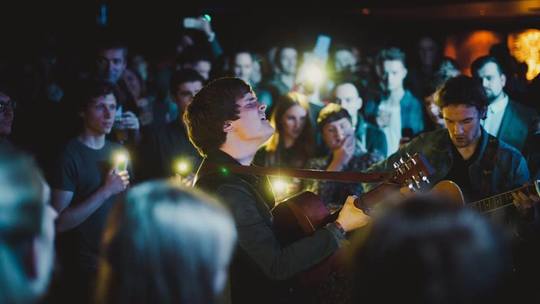 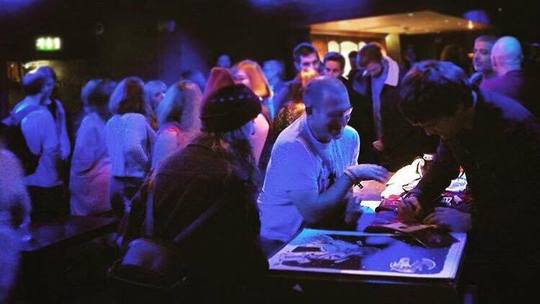 There are times in our lives when going out and about and heading into town for another gig is the easiest option in the world. There are also times when the universe conspires against us and it seems like even getting to the gig is just a pure impossibility. Tonight was one of those times, but I battled on through and, oh my, I’m so glad that I made it.

Down at the Borderline with all its moody pipes and concrete, and I arrived just in time to witness the new phase of Robbie Boyd. He’d lost the red drainpipe trousers and the slightly preppy get-up from a couple of years ago, and the three women I was with all agreed that his new, more relaxed, look was a winner. He’d had a busy three months of writing and rehearsing and had heaps of new material which he debuted tonight. Boyd whizzed straight off after the gig to a studio in Wales to record some of these new sounds for his second album, which after tonight I’m looking forward to hearing.
Boyd’s new collection of super-chilled songs seemed like they were streamed straight from the heart. His audience interaction was also more laidback and untroubled and he had the whole room clicking along to the introduction of one of the new tunes. At times there was an almost spiritual air to Boyd’s delivery, as if he’d finally seen the light and found his way. The industrial pipes and bare wires of the venue seemed to melt with the plush tones of a brand new song never played live before - 'Take it Slow' - so new it had only just been finished this week. Boyd left us all eating out of the palm of his hand with a sweet little singalong song and everyone joining the refrain of ‘Who's standing, who’s standing, who’s standing in your way?'

Dead on 9pm and Tom Speight and his band trooped on to the small stage. They looked like they’d made a bit of an effort in unified attire, all matchy black Ts, matchy all-black shirts and black jeans. If I saw them on mass strolling down the High Street, I think I’d easily win my eagle-eyed observation game of ‘in a band/not in a band’.

With two guitars, bass, keys, additional percussion and drums, Speight and his crew created a big sumptuous sound in a small room. The floor-space filled up even more for Speight’s set and the clientele was smarter than your average gig goer. Speight quipped that playing a gig is a bit like putting on a birthday party – there’s always a worry that no one will turn up. But turn up they did, in their droves, for Speight’s first ever headline slot at The Borderline.

I loved the set tonight, I’d only heard Tom Speight before in a short acoustic stripped back set, but with the full band, it’s a different effect altogether. There was a lushness in the layered sound of ‘The River’ with its squeaky guitar and the muffled soft sticks grazing the cymbal. Lydia and her harmonies added another level of aural delight.

‘Green eyes’ had the added bonus of vocalist Eliza Shaddad with her trickling tones enhancing Tom’s and at times the two voices seemed to melt into each other. Tom and the band then came down into the floor for ‘Joanie’. A circle of light was formed around them and such sweetness swept across everyone in waves. It was a moment of proper acoustic connections. One of those moments when shivers ripple and endorphins rush.

As if that wasn’t enough, Turin Brakes then joined in for ‘Little Love’ a co-written clap-along full of life and energy. If I could have bottled this and distributed on the tube on a damp and grey November morning I think I’d have a lot of smiley people.

‘Willow Tree’ (aka the wedding song) had me welling up and for about the umpteenth time of the night I was so glad I had made it to the gig. The final song ‘Love’ (before the cheeky addition of final final song ‘Faraway’) confirmed that all the troubles and traumas to get here had been totally worthwhile. Everything sounds better with music.