Short But Sweet... SHVPES Step It Up In London 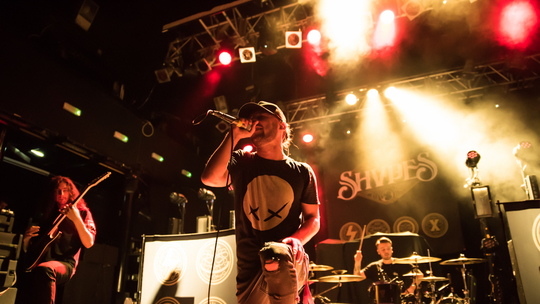 Born to sing, forced to scream. No, actually, that doesn't refer to the headliners. Openers Holding Absence had a vocalist who did his best to scream actual notes even when he was doing harsh vocals. There wasn't much melody coming from their guitarists, so the band were a lot more listenable when he concentrated on the clean vocals he can do better.

Chasing Cadence had no such problems. Their take on modern metal with decent riffs, predominantly clean vocals and frequent forays into the middle of the pit by band members got this difficult midweek crowd starting to warm up and move.

Press to Meco were the odd ones out on this bill, being more alt-rock and only intermittently heavy in their sound. Nevertheless, they've been gigging for a few years and had brought along a sizeable contingent of fans, who sang along to all the vocal harmonies and danced like loons. By the end of their set, they even managed to incite the first circlepit of the evening and get everyone in it to pretend to be monkeys. It certainly scored highly on entertainment value.

With only 40 minutes of allotted set time, SHVPES didn't even get to play the whole of their début album, but everyone who'd heard it knew exactly what to expect. They skipped a couple of the tales of heartbreak and the slower album closer in favour of the protest songs about the state of the world, a wise choice as the latter had more scope for audience participation. Sure enough, there was plenty of headbanging and singing along to the likes of 'Bone Theory', 'Skin and Bones' and 'God Warrior', while a few of the V-signing foam glad-hands they were selling at the back could also be seen in motion.

Even this ultra-modern young crowd weren't sure what to do most of the times Griffin Dickinson started rapping, however, although a lot of them shouted the "Take your aim, p****!" bit in set highlight 'Two Minutes of Hate'. The circlepit also remained quite small for the first half of the set, so Dickinson decided literally to take matters into his own hands, leapt off the stage and dragged a bunch of people into the pit. Once it had got going, he followed up with a couple of stagedives and landed rather awkwardly the second time, but kept on screaming lyrics anyway. This persistence could serve SHVPES very well indeed.