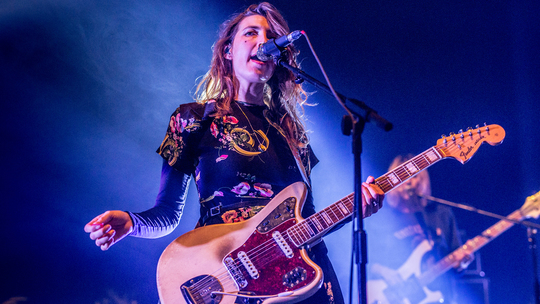 Their hard to define blend of guitar music slips from rock to grunge to shoegaze, with the only constant the heavy drumming of Stella Mozgawa. Despite the gulf in the genres covered however the undertow of Warpaint’s music has a dark-but-funky sound, driven by Jenny Lee Lindberg’s bass.

Supporting the recent release of 'Heads Up', the group’s third studio album, Warpaint performed a career-spanning set at Camden’s Roundhouse. On a minimally-designed stage, empty bar some fairy-lights and potted plants, The Fool’s ‘Bees’ opened the set, before the instantly recognisable ‘Intro’ and ‘Keep It Healthy’ from 2013’s Warpaint conjoined as they do on record. The seguing of tracks was a technique used frequently throughout the evening, not always with numbers that follow each other on albums, but linked together through steady, softly-flowed jamming.

After the two back-to-back Warpaint tracks, Emily Kokal remarked of it being “time for some new shit”, with 'Heads Up’s title-track fitting the bill. Yet it was the preceding album of Warpaint that made up the lion’s share of the show – something not disliked by the audience, but unusual given the recent release of the latest record.

The effortlessly catchy bassline of ‘Hi’s intro got the audience’s shoulders bouncing, and ‘Disco/Very’ provided a platform for co-frontwoman Theresa Wayman to showcase her beautifully soft vocals.

Given Warpaint’s strength seems to lie in producing albums that ebb and flow nicely between different – but well sequenced – songs, when ‘Love is to Die’ and (the aptly titled) ‘New Song’ were played in tandem you were reminded of how good they can be at penning the occasional single. The former is a song that builds fantastically through the patient addition of instruments, and the latter is a great pop track, using upbeat samples played by Kokal that give a light-hearted twinge to the number, juxtaposing the majority of other Warpaint material.

If the evening’s ending felt a little strange after the obscure ‘Krimson’ followed ‘Biggy’ and ‘So Good’ in the encore, you were reminded that it’s exactly this obscurity that makes Warpaint interesting. Doing things differently is definitely something to be lauded.