The Lovers That Went Wrong 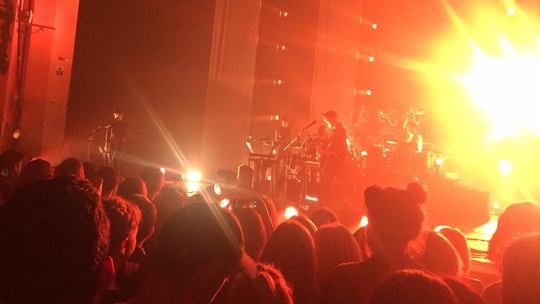 It was my first time seeing somebody play at the Brixton Academy and I have to say I’m definitely a fan, despite it staying cold enough throughout that a coat was required. The intimacy of the venue, with it’s sloped floors and low balcony, was perfectly suited to seeing a group like Daughter. I found the crowd to initially be surprisingly difficult, however, with the supporting performance by the extremely talented Wilsen struggling to be heard over the murmur of people talking.

Though, as soon as Daughter stepped onto the stage and the house lights suddenly extinguished, the audience immediately quietened. Elena Tonra has the kind of voice that makes people shut up and listen - not because it’s so loud and intense, but because of the complexity of emotions it contains. In my mind Daughter is the kind of music which always makes you feel like you’ve just been through a bad break up, even if you’ve never dated anyone in your life. That might sound like a criticism but there is something cathartic and heart-wrenching about the band’s particular breed of indie folk that sets it apart from similar groups out there.

I think it’s fair to say a lot of bands sound essentially exactly how they do on their album, but the same cannot be said for Daughter, with the entire set running on a level of energy noticeably dissimilar to to their recorded sound. This was undoubtedly at least partly due to the band being joined on stage by a talented three piece brass ensemble who also acted as back up singers. This added a richness to the band’s sound which lifted it up from being quite as melancholic and reflective as the latest album 'Not To Disappear' tends towards.

The first song which for me really showed off this difference was "Alone / With You", a beautiful mix of rhythmic drums and then pared back singing, which highlighted Tonra’s incredible voice. This was a pattern throughout the set - intense, energetic drums and brass instruments in stark contrast to those moments when it was just Tonra and Igor Haefeli’s often touchingly delicate guitar.

For me, a lot of the beauty of Daughter lies in her heart wrenching lyrics which always manage to rise above sentimentality. The fifth song "Tomorrow" is an excellent example of this, with the chorus "But don’t bring tomorrow ‘cause I already know / I’ll lose you" a lament reminiscent of early Ben Howard in it’s rawness. Frequently Haefeli’s guitar feels like an echo to Tonra’s voice, reverberating beneath her lyrics in songs like "Doing the Right Thing". Throughout the trio of Tonra, Haefeli and Remi Aguilella on drums feels close knit and symbiotic, ebbing and flowing at points to highlight the separate talents of the three.

What saved the set from at points becoming a little too plaintive (hands might perhaps have begun to creep into pockets in order to text ex-lovers), were more threatening tunes. "No Care", for example, is the kind of music I picture angry 90s teens singing along to into hairbrushes. It’s a song that depicts a particular brand of post-coital bitterness, with the chorus chanting "No care, no care in the world" in the face of what’s obviously a story of frustrated love. Though of course, despite how beautifully performed many of the tracks from the latest album were, the crowd really exploded with joy when towards the end of the show the anthemic "Youth" came on. Whereas all the newer songs certainly kept the audience rapt, it has to be admitted that it was only ‘Youth’ which had every voice in the room singing in unison.

Overall Daughter was an emotionally charged, haunting gig which I don’t see myself forgetting for a long time. Perhaps more importantly, Daughter’s live performance was so significantly different to their album that I felt like I was able to see so many of their songs and lyrics in a new light. Whereas whilst I listen to their albums at home and enjoy the subtlety and slower pace of their sound, the change in pace and instruments gave a breath of new life to their music. It’s this promise - which I hope would hold true for future performances - of an unexpected side to this band, which would certainly have me coming back for me.