Floating Away On An 'Ocean' By Parekh & Singh 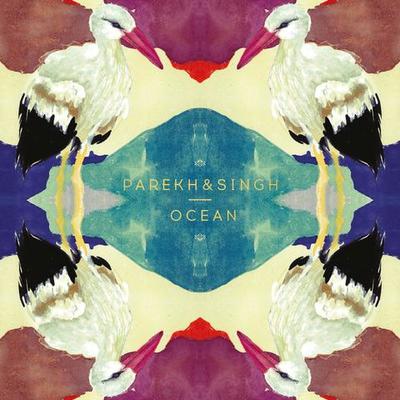 Have you ever wondered what an album of ‘dream-pop from India’ might sound like? Ever paused to consider what noise the 1950s would make if they were reimagined in 20th century Kolkata? Or have you ever closed your eyes and been so immersed in music that it feels like you’re floating away in the deepest and calmest sea without a care in the world? If the answers are ‘yes’, ‘yes’ and ‘not yet but I need some of that in my life’ then debut album ‘Ocean’ from Parekh & Singh is for you.

I first became aware of this when a friend of a friend of a friend on Facebook mentioned that his friend in India had released an album and that they had a video on YouTube going viral and getting a lot of attention. So I took a little listen and pretty much fell instantaneously in love.

"I love you, baby, I love you, doll" (or ILYBILYD in the Twittersphere) is the opening track of the album, and runs like an overflowing cupful of the sweetest honey imaginable. Its' soothing tones and aplomb-o-matic gorgeousness had me at the moment that ‘serious’ was rhymed with ‘mysterious’ in that low-key nonchalant kind of way. There’s a detachment in the almost dead-pan delivery of romantic lines which prevents this from becoming a big bucket of liquefied slush. When I first heard this song, I’d had a very late night, followed by 6 hours or so of my youngest son vigorously vomiting, and to be honest all I wanted to do was curl up in a ball and shut out the world. But then I heard this and it was like medicine to my soul. Not the yucky kind of medicine that tastes like dry salty chicken feet, but the most delicious, most marvellous and most melodious mouthful ever. It soothed me in the same way that hearing my mother’s voice singing ‘You are my sunshine’ would.

"Me and You" affirms my new found affection for this album and makes me want to go ice skating round the kitchen, whirling and twirling and carving out heart shapes in the laminate floorboards. Love songs sound different in a minor key and this has class and comfort in a straightforward and down to earth style. An instant classic.

Stand out track "Newbury Street" has the same kind of ups and downs as one of Damon Albarn’s auto-biographical melancholic narratives. It’s beautiful and easy to listen to and has the floaty feel of a balloon on a string which has slipped the clutches of the toddler in the party dress and is rising up into the bright blue beyond. Lushness.

"Hill" is an amazingly pretty merging of exquisite sound and homicidal lyrics. Beauty overlaid with darkness has always been a favourite of mine. This track has the power to drag me so deep into this love affair that I don’t want it to ever end. "Hill" is very Gorillaz, very disconnected, oh, and it has a Woody Allen sample thrown in too. My second favourite to "ILYBILYD".

There are the briefest suggestions of Grandaddy and The Flaming Lips on "Secrets" and I’m starting to wonder just why Parekh & Singh have been kept so secret for so long? It’s crackly, nostalgic, and evocative in a downbeat manner and again this album reaches out and wraps itself around me like the warmth of the best hug I’ve ever had.

Final song on the album "Philosophize" is a meandering weave through a dream-like state as if trying to catch hold of something that is always just ever-so-slightly out of reach. This is a fine collection of songs and after listening to all nine over and over, I can assure you that you need this in your life. You need this like left needs right, and like up needs down. You need this like love, and like the love of your life. I’m off to drift away on Parekh & Singh’s 'Ocean' once more.