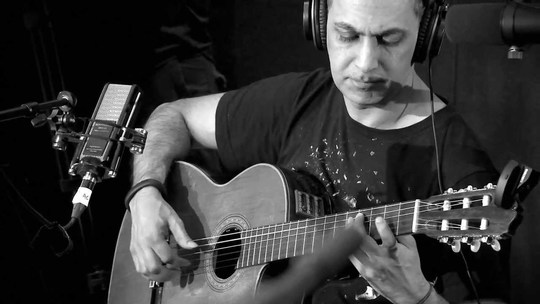 On November 2 2016, the Royal Albert Hall played host to one of the most innovative musicians in Britain. Nitin Sawhney’s music reaches a far wider demographic than most artists, but despite this, his albums have remained very much unknown to the wider public. That is not to say that his musical output as a prolific composer is unknown with ‘Human Planet’, ‘Wonders of the Monsoon’ and ‘Ivor the Invisible’ amongst the 45 TV programmes and films he has scored alongside Videogames such as ‘Enslaved: Journey to the West’. He has also worked with Sting and Paul McCartney amongst others and is an Associate Artist with Sadlers Wells Theatre.

The concert contained a mix of songs from throughout his career and gave a real insight in to the sheer virtuosity he has displayed over more than two decades. Sawhney is an incredibly generous collaborator and preferred to be in the background as his guest artists took centre stage. Eva Stone accompanied him on two songs from ‘Dystopian Dream’, his most recent release, her amazing voice causing the songs ‘Days R Gone’ and ‘Silence’ to soar in live performance. Soumik Datta played an Indian stringed instrument called a sarod and created a stunning wall of stone thanks to Sawhney’s mastery of the whole range of instruments from piano and guitar to tabla drum. I think in many ways that is his secret, the ability to blend these diverse instruments in such a way that no one sound dominates and they come together to create something more than the sum of their parts.

Joss Stone’s amazing voice was featured on two songs, the most recent of which ‘Keep the Light On’ was a real highlight of a marvellous evening. When he played songs on which he was the main attraction, Sawhney showed his true genius as a guitar and keyboard player. The thing I noticed was that he created a huge amount of music with little apparent effort, his hand barely appearing to move at times as he strummed the guitar, yet playing so many notes that it almost sounded like a duet. Ashwin Srinivasan played the flute beautifully and was clearly comfortable on stage with his regular collaborator, the two of them having first recorded together in 2005 on Sawhney’s marvellous album Philtre.

The final collaborators I wanted to mention were the dance duo Wang Ramirez who gave the night a more theatrical edge with their modern dance. Although I enjoyed their performance, to me it was still all about Sawhney’s incredible music.

The evening finished with the fantastic track ‘Prophesy’ which showcased the guitar of Sawhney and the tabla drum of Aref Durvesh who worked together wonderfully well throughout the evening. It was fitting that the final piece of music saw Sawhney’s incredible musicianship featured, but true to form he seemed at his happiest sharing the deserved acclaim. If the name Nitin Sawhney is unfamiliar to you, track down any of his albums and you are in for a treat. My suggestion is to start with probably his most accessible album, ‘The Last Days of Meaning’ featuring John Hurt.