The Serenity Of Suffering

No Suffering Or Serenity For Korn 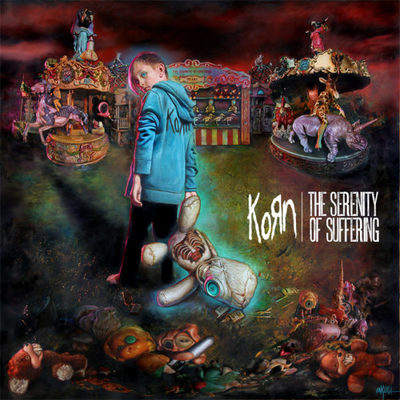 The Serenity Of Suffering

Korn formed back in 1993 in California. Have they really been around for that long? Their new album 'The Serenity Of Suffering' is their twelfth and in my opinion it stands up very well against some of their best albums to date. They have been successful in the UK my home country but I am surprised that they haven't reached even greater heights here. I know from seeing them at festivals in the past that they retain a fiercely passionate fan base.

The new album grabs you by the balls with the first track "Insane" and it barely lets up from there. "Rotting In Vain" bleeds into your soul and doesn't want to leave. This was the first single to be released from the album back in July. Slipknot's Corey Taylor provides the album's big guest appearance on "A Different World", this briefly slows down the mood and is perhaps one of the most melodic songs on show here. It would make a great single and has the potential to attract a number of non-Korn fans (yes folks there are some) to the band.

"The Hating" is stunning and among the most powerful songs on here it is as big and hard as metal comes. "Take Me" was released as the second single at the end of October. It is classic Korn and will sound phenomenal played live I am sure. Another soon to be live favourite is "Everything Falls Apart". Only it doesn't fall apart it is a full on Korn shaped slab of mega metal.

Currently I have many of the songs from this album in my head after just three listens. The biggest metal earworms are probably "Die Yet Another Night" and the pulverising juggernaut of "Next In Line". This is a Korn album that compares incredibly well with my two favourite albums by Jonathan Davis and the boys; 'Life Is Peachy' and 'Follow The Leader'.

The core of the band has never really changed with front man Jonathan Davis on excellent form here and supported magnificently by guitarist James 'Munky' Shaffer and Reginald 'Fieldy' Arvizu on bass. Guitarist Brian Welch was a founding member and he returned to the band in 2013 after a gap of eight years. Ray Luzier is possibly one of the finest drummers in metal today, he joined Korn in 2007.

Nick Raskulinecz's production on this LP I think brings out better than the best from Korn, which is not surprising given his CV. The album's cover is another masterpiece which screams with the typical Korn imagery. It was created by American artist Ron English who has also worked with the Dandy Warhols and Pearl Jam. Is there anything wrong with this album? No there isn't, well apart from the lack of bagpipes!