We Got It From Here... Thank You 4 Your Service

Read more
REVIEW album A Tribe Called Quest We Got It From Here... Thank You 4 Your Service

We've Got Something 4 You... Thank You 4 Your Patience 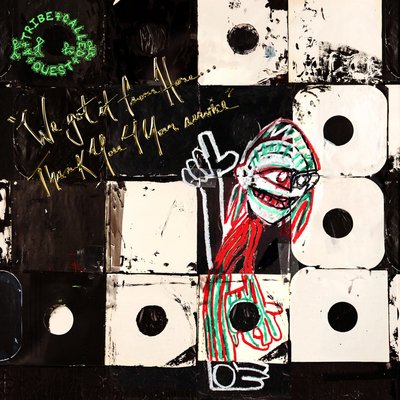 We Got It From Here... Thank You 4 Your Service

After what feels like a lifetime, and indeed a lifetime for younger hip-hop fans, funky rap group A Tribe Called Quest have released their final album entitled ‘We Got It From Here...Thank You 4 Your Service.’ Since the announcement, fans have been sitting in anticipation for Tribes' latest, and final, offering and they definitely will not be disappointed. Their first album in 18 years features all the members of Tribe, including the late Phife Dawg, accompanied by an all star cast including Kendrick Lamar, Kanye West, Busta Rhymes, Andre 3000 and Elton John. Already hailing great reviews by critics, hip hop fans and those not even too interested in the genre, 'We Got It From Here' is an amazing last hurrah for the rap legends.

The album has a sentimental feel to the classic hip-hop sound as well as an air of confidently handing over the musical baton to the next generation. "Enough!!" seems like a homage to the music of The Fugees with "Mobius" having the feel of a classic Mobb Deep tune. As well as this there are shout outs to modern artists with Kendrick, Joey Bada$$, Earl Sweatshirt and J Cole all being mentioned on tracks.

From the outset, 'We Got It From Here', returns the sound fondly associated with A Tribe Called Quest. The opening track, "The Space Program" instantly returns feelings of nostalgia and has a feeling of telling their fans: "We’re back." This classic sound is present throughout but also distinctly experimental with essences of reggae, pop, rock and modern hip-hop all sitting as influences on the album.

The album has several star features including Elton John and Andre 3000. "Solid Wall of Sound" is an example of this experimentalism with Elton John providing a pop undertone to a track with solid lyrical features and Afrocentric infusions. "Kids..." features Andre 3000 with his laid back and effortless flow opening the track in a song that explores the world from the perspective of a young black American and the trials and tribulations of everyday life.

"Moving Backwards" seems to address the albums classic feel with the opening lyrics stating "I hope my legendary style of rap lives on", albeit with an almost contradictory feel as Paak Anderson picks up in a couple of verses. This track's fluidly slips from the modern Paak to the legendary tribe, expressing that modern hip-hop may have a new sound but the essence is still present and that the legendary style put into question in the opening will surely live on, especially when supported by legends of the genre.

In such a politically important year in America, it would almost be expected for A Tribe Called Quest to reference these events, and they do, but not on the track you expected. One track entitled "The Donald" is not actually about controversial presidential elect Donald Trump, however "We the People..." does take aim at him. In a funky and uniting track expressing the power of the people and that "everyone eats the same food" regardless of status. Phife and Q Tip take shots at a corrupt media and Q explicitly calls out Donald Trump in the hook with reference to his presidential policies, stating: “All you Black folks you must go, all you Mexicans you must go, and all you poor folks you must go, Muslims and Gays, boy we hate your ways...”

All in all, 'We Got It From Here' is another, and most likely final, classic from A Tribe Called Quest. Their iconic sound is present accompanied by a modern twist, personified by the presence of artists like Kendrick Lamar. It is certainly a fitting send off for Tribe and a handover to the new generation of artists, who it seems they have great faith in to carry on the hip-hop movement. After 18 years, it feels like they never left music at all, and despite being coined as their final album we might be anticipating another masterpiece in 2034. Hopefully the album will spurn another tour from Tribe and fans will not have to wait almost two decades to see ATCQ perform their recent offering, along with fondly remembered classics such as "Left My Wallet In El Segundo", "Bonita Applebum" and "We Got the Jazz". This funky, jazzy and experimental concoction is a fitting send off for Phife Dawg, who like many musical greats left us this year. Thank you for your patience... Tribe has it from here.