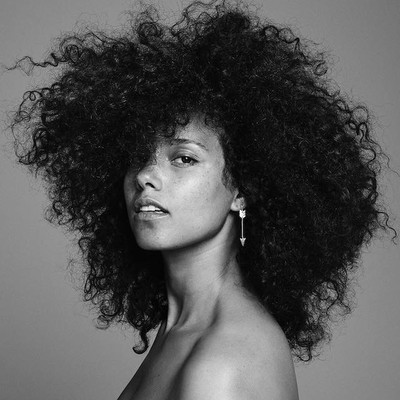 Alicia Keys is a truly remarkable and almost underrated talent, yet with 10+ Grammy Awards under her belt and a roster of hit after hit albums she has formed a career around piano ballads and vulnerability, but now, four years have passed since her last album and 'Here' she is... a 35 year old woman, so what does she have to say for herself?

Well actually, everything. The album deals with themes of insecurity and interestingly a fight against beauty and cosmetics. On the track 'Girl Can’t Be Herself', Keys utters the empowering and powerful “maybe all this Maybelline is covering my self-esteem", if ever a commentary on how beauty is shown...Alicia goes in for the kill.

Being a singer-songwriter has its perks for Alicia as she is able to be creative and take risks. The track 'Illusion of Blues' is particularly interesting because she takes on the role of a 29 year old addict in a truly heartbreaking and honest way and it begs the question of what truths Keys is keeping to herself and unveiling through the power of lyric.

Alicia graced the UK with a performance of 'Blended Family (What You Do For Love)' on The X Factor, and it's a really great moment, with it's raw lyrics detailing being married and being a stepmother, it's really quite the euphoric number on the album and is the only track on the record to have a feature (A$AP Rocky). Family being a key theme on the record with tracks like 'Work on It' which is about women in their 30s who develop a new meaning to their lives, instead of frivolous tasks keeping them happy, it's the joy of family that masks them now. Guess that 'Teenage Love Affair' grew up and didn't need to bother with a 5th floor staircase anymore.

The singles 'In Common' and 'Hallelujah' are both spectacular in their own right. 'In Common' is an electronic, almost-verging-on-dance number about "if you could love somebody like me, you must be messed up too” and by the end of the song, it feels like she's reached this journey where shes content with the way the relationship is. “Hallelujah” has a religious undertone to it and seems to be a moment where Alicia's weakness relies on religion to help her through.

'Here' is a really interesting record and seems to capitulate what Alicia does best... she experiments and relies heavily on her gorgeous voice and lyrical content and boarders on a whole range of issues. I mean, if you don't sob whilst listening to 'The Gospel', I don't know if you're even human. It's amazing how magical a piano ballad really is and Alicia shows us this through the record.