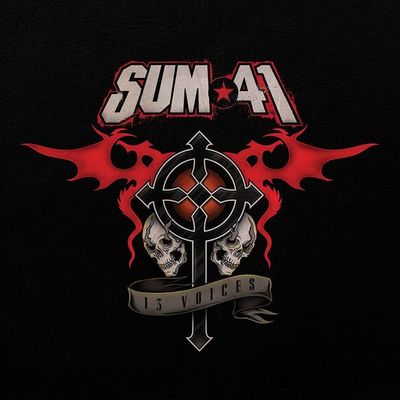 "A Murder of Crows", that's all you need to know so far, the first track on the very new album '13 Voices' dives straight into a triumphant return from Punk Rockers Sum 41, and oh boy what a return. The track holds a charismatic incline in to what we've been missing for quite some time now (5 years to be exact).

We all remember these Punks by "Fat Lip" and "In too deep" and how could we forget, those two memorable tracks are favourites for a reason. The angst, rebellion and truth yet fun and quirky musicality that is Sum 41 made them favourites and hold a special place in our heart for them. With minor set backs, the band kept quiet for some years but now they are healthy and ready to rock!

Within the first few tracks of '13 Voices' there is a clear formula in which Sum 41 are putting out there, it's heavier, more fluent and somewhat darker. Though, the anger is portrayed it's very honest and reminds me of favourite albums that follow this same formula such as Bring Me The Horizon's 'That's the Spirit' and Hollywood Undead's 'Undead', ultimately producing a damn good album. Though, it sounds very different it works, on the other hand it does make me miss the raw, funny and punk sound that Sum 41 first produced.

Reminiscing about the good old days of "In Too Deep", its track 7 that really gets to me. "War", I feel like I don't want to explain this song to you - just listen and then you'll understand. When bands create music that leaves you speechless and all the feels, a thank you is all that is needed! So now that Sum 41 are back with great music, adding to their back catalogue of awesome music it's time to thank them and get ready to appreciate '13 Voices'.