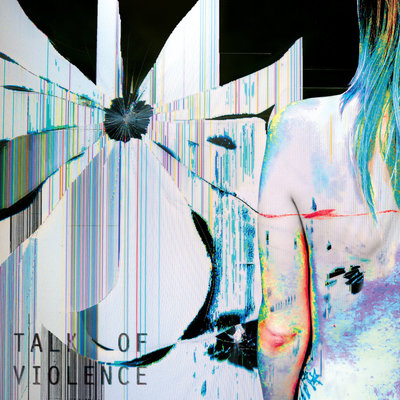 The South East London politically fueled band, Petrol Girl, recently released their second album 'Talk of Violence'. The female fronted band take a stand against capitalism, greed and ignorance that comes across in the lyrics. Not only do they have lyrics with such righteous opinions but the band's name itself has a deeper meaning. Petrol Girls are named after Pétroleuses, a group of women rumored to exist in the ending days of the Paris Commune in 1871. The group of women made explosives out of milk bottles hurled them into buildings as an act of resistance against the french government.

Petrol Girls were not a band I was familiar with until their album cover pulled me in to give them a listen, and listen is what I've done since I heard the first song. The punk band start the album with “False Peace” and you won't want to pause the music till after “Rewild” the final track. Ren, guitarist and vocals explained “I think 'False Peace' is a perfect way to describe the way resistance gets silenced and inequality maintained in the name of a 'peace' that only protects the wealthy.” This stance is taken throughout the album with sexual political themes and strong feminist views also shown. This band stands for everything they write about as all song are written by them, some songs about world issues and some about self issues.

Track 4, “Treading Water”, focuses on the current European migrant crisis and how society’s perceptions of the issue is shaped by the media. Track 3 “Fangs” is about demonising of mental health in the United Kingdom. Ren explains, “the Tories won the general election in the UK, they described depression as ‘anger defanged’ and pointed out that a depressed population is much easier to control than an angry one. I think women especially are pushed to deny their anger, but I've found embracing mine essential to getting some control over my mental health. If depression is anger with its teeth taken out, maybe anxiety is fear with its eyes gouged out. The final lyric of the song, "if you don't give us space, then we will take it", is a direct quote from a feminist intervention that occurred at the refugee and migrant conference in Hamburg. A massive group of women and trans people lead by refugee women took over the main stage and started chanting this phrase over and over. "I nearly cried because I felt like I was experiencing true solidarity when I joined them; I felt so personally empowered by their action.”

Overall the punk band consisting of Liepa Kuraitė, bass and vocalist, Ren Aldridge, guitar and vocalist, Joe York, guitar and vocalist and Zock on drums take an important stand against the media filled public that blindly consume the tales told. This album is a must listen for anyone who stands for what's right or just overall likes punk music.