Expectations Are A Heavy Crown 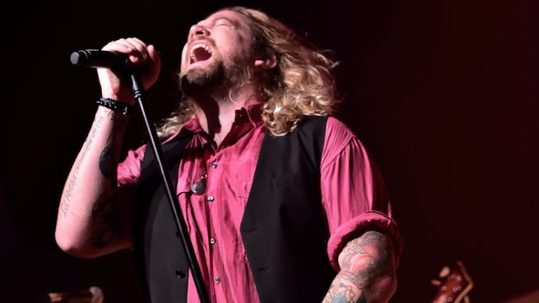 Openers The Wild Lies have been undergoing something of a metamorphosis of late. They started off as one of the all-too-numerous identikit blues-rock bands that have been popping up in recent years (more on that later). Then they supported British Lion and found themselves in front of crowds of classic rock fans who aren't into blues-rock-by-numbers bands. The Wild Lies have been steadily trying to make their sound heavier ever since.

Sure enough, the new, heavier, crunchier Wild Lies sound was very prominently on display this evening. New song 'Your Last Mistake' was a particular highlight for its unusual rhythm. However, although Matt Polley was in a lot better voice than last time I saw them, when he seemed a bit under-powered in contrast to this change of direction, he faltered a bit at the end of the last song, 'Can't Carry On', which is their latest single. The Wild Lies are almost where they've decided they want to be musically, but not quite yet.

If The Wild Lies have realised there's a constituency of classic rock fans who are bored of bluesy bands, Planet Rock hasn't, which is proving a double-edged sword for Inglorious. In the course of this year, they have got a lot of airplay, sold plenty of t-shirts and even won an award.

Sadly, it's all coming at the expense of what got me excited about them in the first place (and maybe what made Brian May get excited about them, judging by his own output and the Air Guitar compilations he curated, where there isn't much blues). Nathan James expressed delight at how much more time Inglorious had tonight than they usually did as a support band, but they filled it with so many bluesy songs that there was even less of the exciting hard rock than there was earlier this year when they supported The Winery Dogs.

The fact that Inglorious are such talented musicians makes what's happening to them so upsetting. So far Andreas Eriksson is still managing to shoehorn fast skillful solos into the middle of the slow bluesy tracks. The often underrated Colin Parkinson got a chance to show off his considerable ability with a bass solo. James' vocal range is of course tremendous and he took every opportunity to demonstrate just what he could do with it. Yet when you compare the title track of Inglorious' self-titled album with the bulk of the set, you get a sense of what we might be losing. The song 'Inglorious' saw James singing clear, soaring vocals over a straight-out rock song and was my favourite moment in the set by far. And yet, I bet Planet Rock is only playing songs like 'Girl Got a Gun', where he deforms his delivery into the slurred drawl of the blues. Hence they're going in that direction and getting into the Procrustean bed of Planet Rock. Such a terrible, heart-wrenching waste.

The conundrum of how to keep the music of great rock stars alive after the legends who defined their bands have passed is a pressing question in the classic rock world, and one with no clear answer. Last in Line have taken the same route as Black Star Riders: rename the band out of respect, but make new music to avoid becoming a tribute band. Their set featured 4 songs from the new album, of which 'Devil in Me' was the closest to what you'd expect from a group of musicians carrying on Dio's legacy, 'Starmaker' had a simple chorus that got lots of people joining in and 'Already Dead' had the best headbanging riff.

The majority of the show, however, was dedicated to the songs the people at the front (after a lot of swapped places on the barrier between the co-headliners' sets) had come to hear. It was never going to be the same with Andrew Freeman on vocals, but he's got the capability to belt out Dio's songs, the energy to be an entertaining frontman, and by now, the confidence to banter back and forth with Vivian Campbell, calling his intro to 'The Last in Line' "Def Leppard-pretty" and discussing the merits of rude words (as Marion Cotillard might have said, that was a lot of f**ks). And of course, when in doubt, he just pointed the mic at the audience: the perfectly distinct singalong to 'Holy Diver' was enough to make the hairs on the back of your neck stand up.

The issue of what to do when someone else in a band intended to carry on the legacy of a fallen legend passes away is not one that's been entirely resolved yet. It would get wearing if a band had to acknowledge the same person in so many words every show, and arguably the fact that so many people showed up to hear a set comprised mostly of Dio songs is an acknowledgement in itself. Likewise, it was a fitting tribute to Jimmy Bain for Last in Line to invite his daughter up on stage. However, when Freeman started on that subject by saying that the band had lost someone, I wasn't the only one who immediately put up the Il Cornuto sign, thinking he meant its inventor. Maybe the thing to do would have been to tell a Dio anecdote earlier in the show to let the crowd cheer for Dio, then introduce the tribute to Bain with a reference to when he died so everyone would have known immediately who was being honoured? This chapter in gig etiquette has yet to be written.

This evening proved an interesting study in bands' relationship with what other people expect of them. The Wild Lies are changing to meet the needs of an expected future live audience, but are likely to have a sound more distinctively their own as a result if they can finally nail it. Inglorious are changing to get airplay, which unfortunately leaves them less scope to do what made them amazing and unique among new bands. Last in Line are trying to evolve as their own band while simultaneously not disappointing all the Dio fans who form the backbone of their following. Luckily the new songs fitted in well enough to give some hope that they'll manage it.