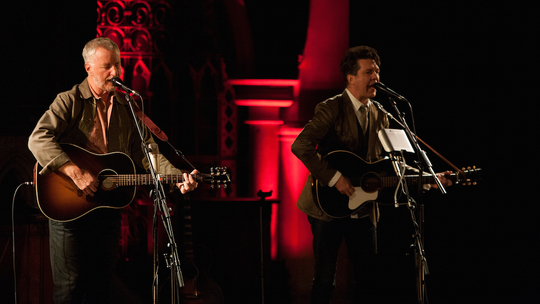 Billy Bragg wrote 'Tomorrow’s Going to be a Better Day' as part of a “war against cynicism”, he says.

Tonight, however, the ode to optimism from the Barking Bard’s 2013 album 'Tooth and Nail' is offered more in hope than expectation.

For a gig aiming to celebrate America’s past in the form of classic country, blues and folk songs inspired by the railroad age, it is fear of the future that weighs heavy; the show takes place on the night that would see Donald Trump elected president of the United States.

Bragg, a lifelong left wing campaigner, is joined by his friend Joe Henry, a California-based songwriter, producer and fellow Trump-phobe.

Playing in the reverential setting of London’s Union Chapel, a 19th century Gothic-styled church, the duo are playing songs from their recent covers record, 'Shine a Light'.

The project saw them record live performances of Americana standards during a 2,700-mile train ride across the US, from Chicago to Los Angeles.

Trump isn’t actually mentioned until about a third of the way through, but the ghost of the soon to be president-elect looms large throughout.

During brief solo stints from both songwriters, Bragg’s choice of "Accident Waiting to Happen" from 1991’s 'Don’t Try This at Home' feels particularly apposite.

He also offers an engaging version of Anais Mitchell’s superb "Why We Build the Wall" (“the enemy is poverty, and the wall keeps out the enemy, and we build the wall to keep us free”), aimed squarely at the dishonest populism of both the Brexit and Trump campaigns.

Henry’s ponderous solo spot is less successful. He’s a stylish guitarist and a gifted singer, but not much of a showman.

While the songs are pretty, they have tendency to meander, an impression not abated by some rambling patter between numbers.

Together though, Bragg and Henry make a winning pairing, with Henry’s guitar lines and harmonies complementing Bragg’s blue collar grit.

The mixture of the Essex man’s baritone estuary English and Henry’s higher Californian drawl proved surprisingly effective on record and if anything it works even better together here, aided by the echoing acoustics and intimate atmosphere of Union Chapel.

The duo are particularly strong on a moving version of John Hartford’s "Gentle on My Mind" and on a rousing take on Leadbelly’s "Midnight Special", an Americana classic which rewards Bragg and Henry’s muscular, pacy interpretation.

Other highlights include the Carter Family’s "Railroading on the Great Divide", and "In the Pines", the bluesy folk ballad most famous these days for its inclusion in Nirvana’s Unplugged in New York show.

A seasoned entertainer, Bragg proves equally adept at breathing new life into aged songs by engagingly telling the stories of their origins.

"Midnight Special", for example, takes its central “shine a light” refrain from the idea that if the headlight of the Southern Pacific express shone into your cell in Sugar Land prison, you got parole. A little hope in the darkness, in other words, which was exactly what Bragg and Henry provided tonight.